A Twitter user identified as @_47kasz claimed that Men must have sex up to 30 times a month to avoid prostate cancer. The tweet at the time of fact-checking has 442 retweets, 74 quote tweets, and 1,834 likes.

What is prostate cancer?

Prostate cancer is the development of cancer cells in the prostate gland. The prostate gland produces fluid for semen (a thick fluid that comes from men’s penis when they ejaculate during sexual activity). It is the most common cancer in men; some cases of prostate cancers grow very slowly, while others are very aggressive and spread quickly to other organs. 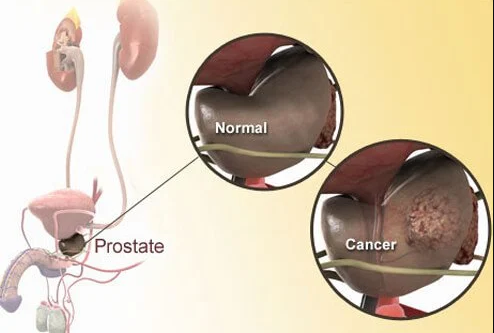 The prostate is a small, soft organ. On average, it is roughly the size of a walnut or a ping-pong ball. It weighs around 1 ounce (30 grams) and is usually soft and smooth to the touch.

The prostate sits deep in the pelvis, between the penis and the bladder. It is possible to feel the prostate gland by placing a finger into the rectum and pressing it toward the front of the body.

The urethra, a tube that carries urine and semen out of the body, passes through the prostate. Because the prostate surrounds this tube, prostate problems can affect urine flow.

This organ is one part of male sexual or reproductive anatomy. The other parts include the penis, scrotum, and testes. 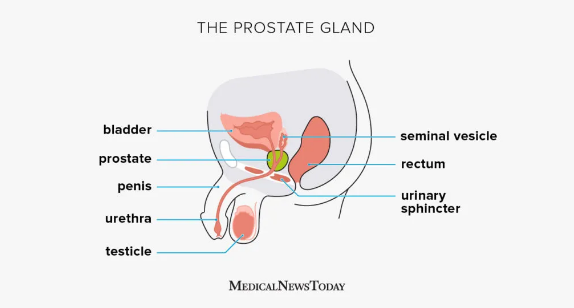 What does the prostate do?

A person does not require a functioning prostate to live, but it is important for fertility. The following sections discuss the functions of the prostate.

The primary function of the prostate is to contribute prostatic fluid to semen. The prostate contributes 20–30% of fluid to the total semen volume. The remainder comes from the seminal vesicles (50–65%) and the testicles (5%).

The prostatic fluid contains components that make semen an ideal substance for sperm cells to live in, including enzymes, zinc, and citric acid. One important enzyme is prostate-specific antigen (PSA), which helps make the semen thinner and more fluid.

The fluid in semen helps the sperm travel down the urethra and survive the journey towards an egg, which is essential for reproduction.

Prostatic fluid is slightly acidic, but other components of semen make it alkaline overall. This is to counteract the acidity of the vagina and protect the sperm from damage.

2) Closing the urethra during ejaculation

During ejaculation, the prostate contracts and squirts prostatic fluid into the urethra. Here, it mixes with sperm cells and fluid from the seminal vesicles to create semen, which the body then expels.

When the prostate contracts during ejaculation, it closes off the opening between the bladder and urethra, pushing semen through at speed. This is why, in typical anatomic situations, it is impossible to urinate and ejaculate simultaneously.

The prostate needs androgens, which are male sex hormones, such as testosterone, to function correctly.

This hormone is important for normal prostate development and function. In the developing male, it is crucial for the development of secondary sex characteristics, such as facial hair.

Structure of the prostate

A capsule of connective tissue that contains muscle fibers surrounds the prostate. This capsule makes the prostate feel elastic to the touch.

Scientists often categorize the prostate into four zones that surround the urethra like layers of an onion.

The following layers make up the prostate, beginning with the outer capsule and ending inside the prostate:

– Peripheral zone: Mostly situated toward the back of the gland, this is where most of the glandular tissue sits.

– Central zone: This surrounds the ejaculatory ducts and makes up around 25% of the prostate’s total mass.

ROUNDCHECK, in a bid to ascertain if the claim is true and to get more insight, spoke to World Cancer Research Fund International (WCRF International), a not-for-profit organization that leads and unifies a global network of cancer charities dedicated to the prevention and control of cancer. The World Cancer Research Fund is the world’s leading authority on the links between diet, weight, physical activity, and cancer prevention and survival.

WCRF who responded to the claim said currently, there is no conclusive evidence that regularly having sex reduces the risk of prostate cancer.

The Journal of Sexual Medicine (an official journal of the International Society of Sexual Medicine) titled Sexual Activity and Risk of Prostate Cancer: A Dose-Response Meta-Analysis, aimed at determining the associations among several female sexual partners, age at first intercourse, ejaculation frequency (EF), and the risk of prostate cancer (PCa), indicated that men with fewer sexual partner numbers, older age at first intercourse, and moderate frequent ejaculation were associated with a significantly decreased risk of PCa.

ROUNDCHECK spoke to a Urologist (A surgeon who treats diseases of the urinary system and male reproductive system including the prostate) who noted that there are a lot of conflicting studies on the matter, however, the issue of having sexual intercourse 30 times in a month to prevent prostate cancer is unfounded and not true.

A screenshot of the conversation had with a urologist on Twitter

In a bid to get more information about the claim from experts, ROUNDCHECK made an open request at Healthtap (a medical group and technology company), and several health experts responded.

Vice-President of the Nassau County Dental Society in Garden City New York., Dr. Robert Trager said “Having sex every day for 30 days will allow one to be exposed to many STDs if safe sex procedures are not followed. A healthy lifestyle and diet and a PSA test once a year will keep prostate cancer in check.”

Also, a Urologist, Dr. Birendra Tandan, noted that Cancer anywhere depends on many factors and there is no known valid study regarding the claim in the Urological literature.

“There is no known valid study regarding this in the Urological literature. And it would be difficult and take time. Cancer anywhere depends on many factors like heredity, environment, diet, and yes, chance. This is the reason that the absolute cure for most cancers has eluded medicine. But dogged research goes on and hopefully one day there will be a success.” she said

“Absolutely not, that is a myth. I doubt that you would find a scientific study on such hypothesis” she said.

In a document made available to ROUNDCHECK titled “Ejaculation Frequency and Risk of Prostate Cancer: Updated Results with an Additional Decade of Follow-up“, evidence suggests that ejaculation frequency may be inversely related to the risk of prostate cancer (PCa), a disease for which few modifiable risk factors have been identified

Also, the authors evaluated whether ejaculation frequency throughout adulthood is related to prostate cancer risk in a large US-based study and found that “men reporting higher compared to the lower ejaculatory frequency in adulthood were less likely to be subsequently diagnosed with prostate cancer.”

They also noted that men in the higher ejaculation frequency categories had some “exposure patterns that might put them at higher risk of morbidity and mortality due to other causes—higher BMI (Body Mass Index) greater alcohol consumption, and more frequent history of smoking and sexually transmitted infections.”

A part of the research reads: “We were concerned that the reduction in PCa risk we observed in this group might be attributable to premature death from other causes among men who may have had undiagnosed PCa. Reduction in PCa risk may be partly explained by premature death due to other causes, but the reduction among men reporting high ejaculation frequency seemingly cannot be explained by this effect alone.”

ROUNDCHECK discovered that the strongest known risk factors for prostate cancer are a family history of the disease, African ancestry, and certain inherited genetic conditions (e.g., Lynch syndrome and BRCA1 and BRCA2). Smoking and excess body weight may also increase the risk of the disease.

Prostate cancer usually has no symptoms until the disease is advanced, rather, early detection can be done through medical screening because it is usually slow-growing.

According to the International Agency For Research On Cancer, records in Nigeria show that prostate cancer is the second most prevalent cancer type (second to breast cancer), accounting for about 12.3% of new cancer cases, which also accounted for 10.8% of cancer deaths.

Prostate cancer is the most fatal of all cancer cases in 2020, with an 8.85% probability or risk of individuals developing or dying from prostate cancer within the space of a year with an Age-Standardized Rate of age 0-35 years (ASR) (the calculated incidence or mortality rate is then called the ASR).

What are the major causes of prostate cancer?

WCRF noted that although it is not known exactly what causes prostate cancer, but non-modifiable risk factors which can increase the risk of prostate cancer include:

– Age – the risk rises as men get older, and most cases are diagnosed in men over 50 years of age.

– Ethnic group – prostate cancer is more common in Black men than in White men, and least common in Asian men.

Although it is still currently not fully understood why some men, including Black men, are at higher risk of prostate cancer. The Prostate Cancer Foundation reports that men of African descent are 75% more likely to develop – and over twice as likely to die from -prostate cancer than White men.

It is thought that the disparities in prostate cancer by race and ethnicity may be explained by unequal access to screening and high-quality treatment, variation in exposure to prostate cancer risk factors, and genetic factors, such that there may be differences in tumor biology that cause prostate cancer in Black men to progress faster or be harder to treat.

In a latest report, the American Cancer Society noted that Prostate cancer is the second-leading cause of cancer death in Black men, with an estimated 6,040 deaths expected in 2022. Black men have the highest death rate for prostate cancer of any racial or ethnic group in the US, 2 times higher than White men. Although there is some evidence that aggressive prostate cancer is more common in Black men, the larger disparity for mortality than incidence largely reflects less access to high-quality treatment. 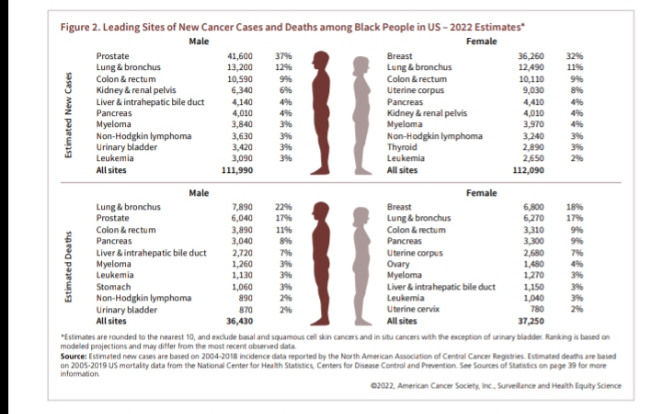 WCRF also highlighted that there is also some evidence that:

– Higher consumption of dairy products might increase the risk of prostate cancer.

– Diets high in calcium might increase the risk of prostate cancer.

Findings have revealed that there is no conclusive evidence to show that regular sex prevents prostate cancer, hence the claim is UNCONFIRMED