CLOSE RANGE: PVCs Registered In 2011 Have Not Expired

The claim asserted that Nigerians should check the back of their Permanent voters’ card (PVCs) to see if it has expired to avoid being disenfranchised at the coming 2023 general election.

CLOSE RANGE: PVCs Registered In 2011 Have Not Expired

A WhatsApp user posted a claim on July 20, 2022, to AAPOLY INFO CENTRAL, a WhatsApp group consisting of students. The post have been circulated many times.

The claim asserted that Nigerians should check the back of their Permanent voters’ card (PVCs) to see if it has expired to avoid being disenfranchised at the coming 2023 general election.

ROUNDCHECK confirms the claim to be INCORRECT. It has also been checked and debunked by several fact-checking platforms.

We took a close look at the claim.

From the claim posted on the Whatsapp group, it raises a false alarm that Permanent Voters Card (PVC) expires and the new card reader by INEC will not accept it during the 2023 election.

Pls, check the back of your Voters Card, if it was registered in 2011, you need to revalidate it at the nearest INEC office. The new INEC Card reader for the 2023 election will not be able to read it. Do it now to avoid disenfranchisement at the polling unit. Kindly help spread this on your various platforms.

The claim was neither signed by any individual nor agency related to election matters in Nigeria. 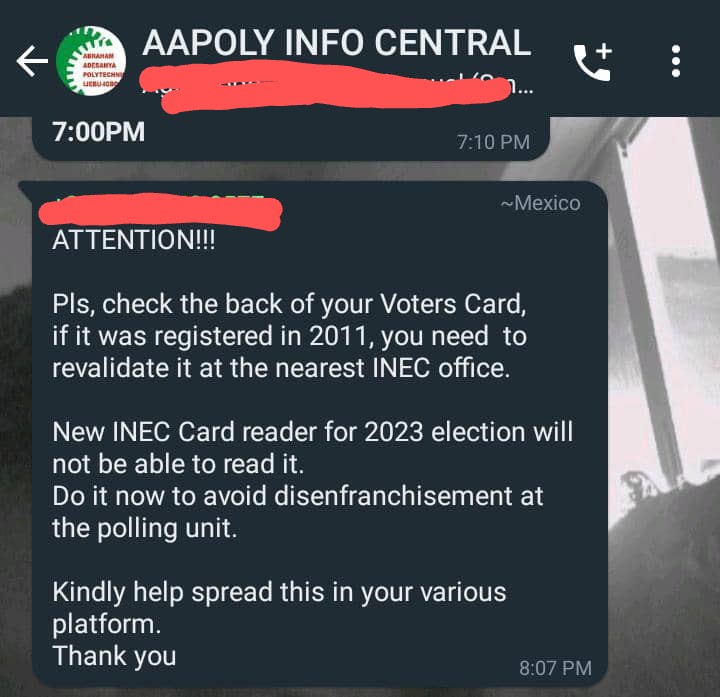 ROUNDCHECK did a search and discovered a news report published by The Cable titled: Fake News Alert: PVCs issued in 2011 don’t need revalidation, says INEC. The report was published on January 21, 2022.

We further checked and found a report attributed to Rotimi Oyekanmi, Chief Press Secretary to the INEC Chairman where he debunked the claim of PVC RE validation.

Mr. Oyekanmi was quoted where he debunked the claim of PVCs Revalidation ” The Permanent Voters’ Cards(PVCs) issued by INEC in 2011 and after can still be used by their respective owners to vote in all elections..”

The report ended with outright disapproval of the claim by Mr. Oyekanmi saying: ” The general public should therefore disregard the fake news making the rounds that the PVCs issued in 2011 need revalidation.

In a news report published on 19, January 2022 by The Sun titled: INEC dismisses expiration of previously Issued Voters’ Cards ROUNDCHECK similar claims was being discredited by and Rotomi

Chief Technical Adviser to the Chairman of INEC, Prof. Bolade Eyinla and Rotimi Oyekanmi Chief Press Secretary to the INEC Chairman discredited the claim saying: ” this information is NOT CORRECT!!! The PVC issued to all previously registered voters remains VALID “

In a  The Guardian news report titled: “You’re wrong, PVCs don’t expire, INEC tells Tinubu”  published 19, January 2022, ROUNDCHECK  was able to trace the origin of the claim to Bola Ahmed Tinubu the All Progressive Party Presidential aspirant for the 2023 General election.

Bola Ahmed Tinubu was quoted to have said in a viral video : “In case they do not announce to you on time, the PVC you have has expired”

The claim that PVCs registered in 2011 have expired and need revalidation is INCORRECT.