An image of a large crowd, on August 8, 2022, has gone viral on social media after a page, Tinubu Media Center – TMC posted it and claimed that Senator Wamakko, a former Governor of Sokoto state and Senator representing Sokoto North Senatorial District, has begun grassroots mobilisation for Tinubu in Sokoto state. 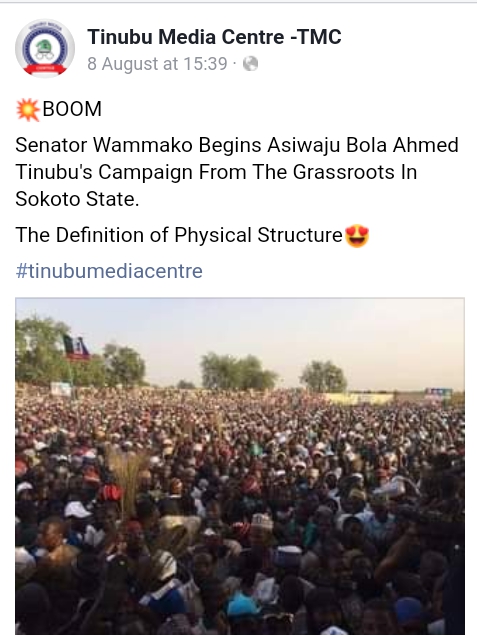 A screenshot of the claim

Senator Aliyu Wamakko is the leader of the All Progressives Congress (APC) in Sokoto state. He is a two-term former Governor of Sokoto state and senator representing Sokoto North Senatorial district, chairman, Senate committee on anti-corruption. And Asiwaju Bola Ahmed Tinubu is a former Governor of Lagos state and APC presidential candidate for the 2023 general election.

In the image, supporters were seen holding brooms and the flag of the APC was equally visible. While different posts have captioned the image differently, all insinuate that Senator Wamakko mobilized a grassroots campaign in Sokoto state for the APC presidential candidate, Asiwaju Bola Ahmed Tinubu. 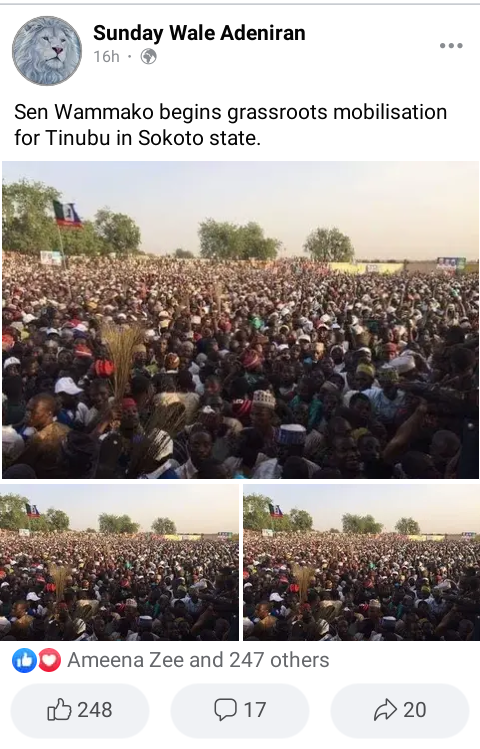 Another Facebook user, King Raji, shared the image with the caption “Senator Wamakko begins Tinubu’s campaign from the grassroots in Sokoto state.” 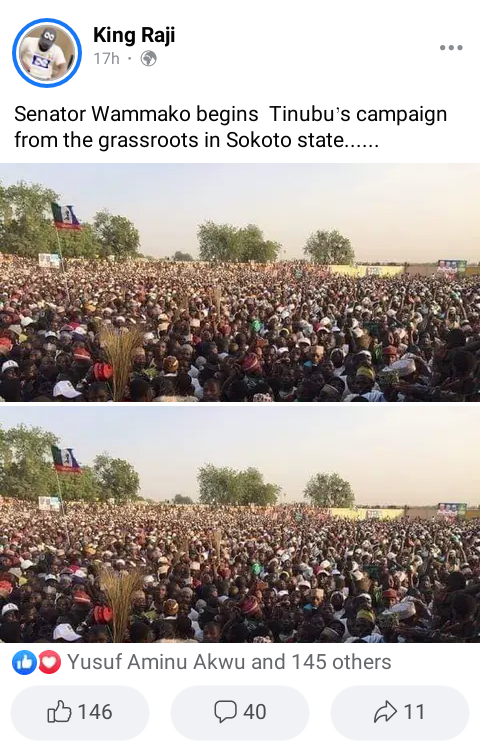 A keyword search on Facebook reveals that many users and pages are sharing the post and image. APC for Continuity also shared the image and some Twitter users. 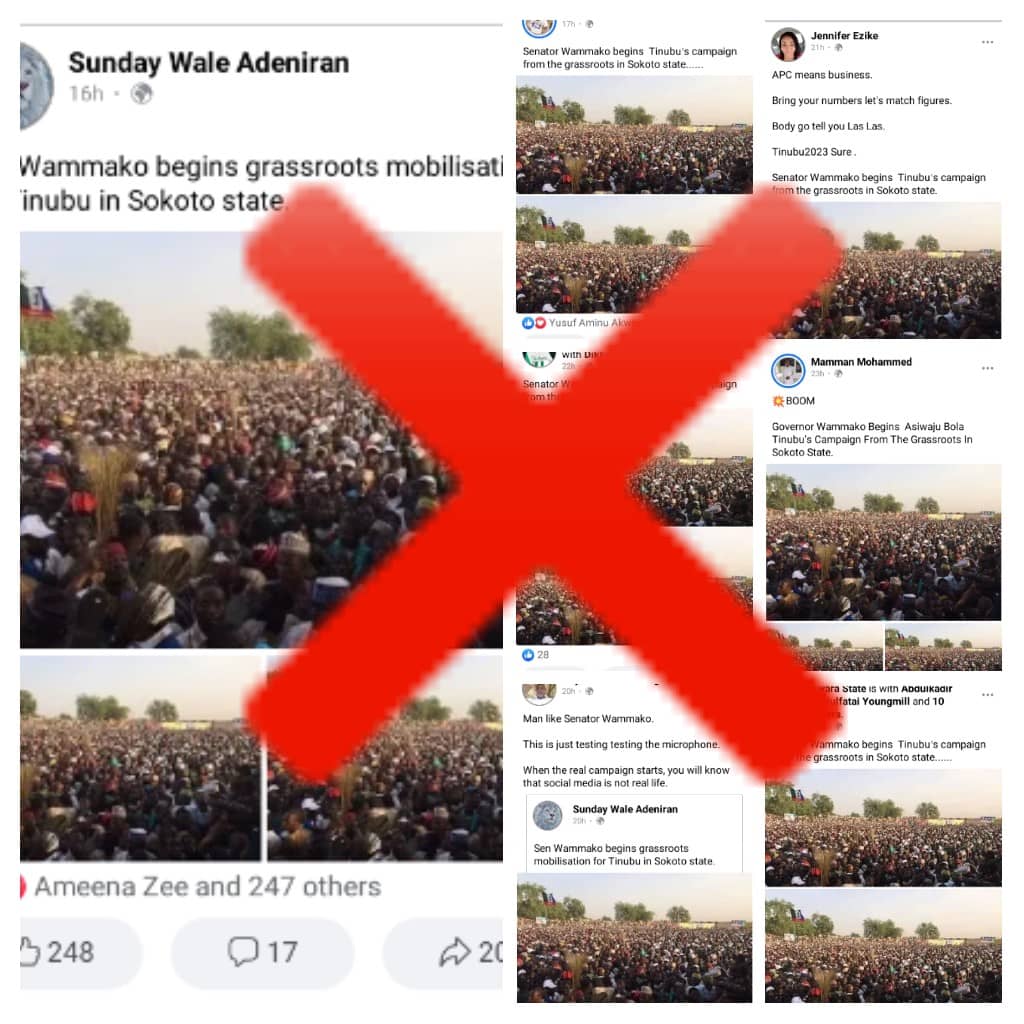 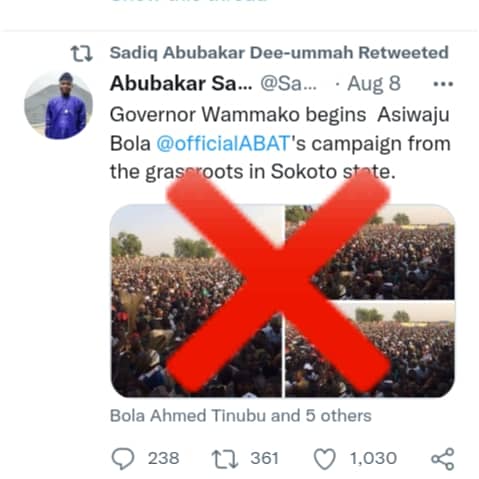 We visited the verified social media pages of Senator Wamakko, Tinubu, and the APC to verify the claim. ROUNDCHECK can confirm that neither the image, the claim nor any campaign activity in Sokoto state was posted on the exact date this claim was made.

We subjected the acclaimed image to a Google reverse image search. Results from the query revealed that the earliest version of the image was first published by PM News Nigeria on January 23, 2019.

The image has the caption: “President Muhammadu Buhari took his nationwide campaign to Sokoto on Wednesday where he pledged to continue his duty of protecting the integrity of Nigerians as well as pursue his three cardinal programmes..” 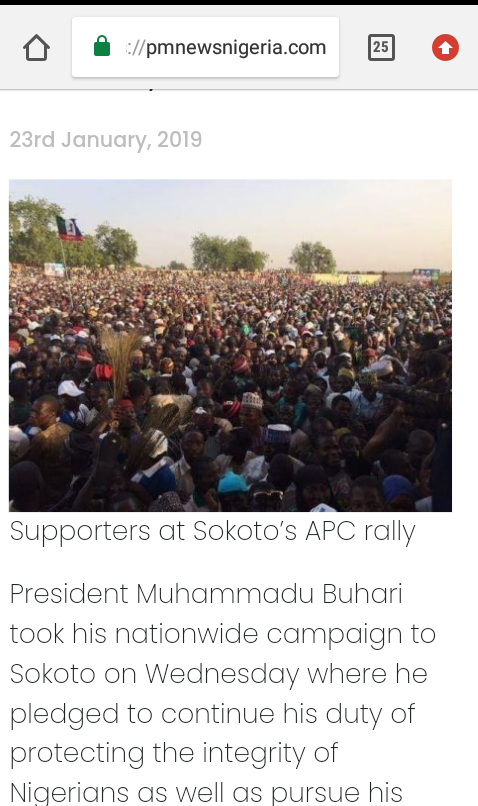 The viral image showing a crowd of people which depicts Senator Wamakko begins grassroots mobilization for Tinubu’s campaign is an old shot of President Buhari’s campaign rally taken in Sokoto State in 2019.

This image is unrelated to Tinubu’s campaign as it first appeared in 2019. ROUNDCHECK can conclude that it is MISLEADING.

It is only being recycled by fake news mongers to make people believe it is related to Asiwaju Bola Ahmed Tinubu’s campaign for the 2023 presidential election.