For anyone who visits the National Broadcasting Commission link, the response on the page comes back as an “error” which indicates that it is ‘expired.

The National Broadcasting Commission (NBC) is a Nigerian body responsible for the regulations and control of broadcast activities in Nigeria. The commission is a broadcast regulator of the Federal Republic of Nigeria. With this mandate, the commission is expected to be active and should grant information to visitors to its site.

In late  July 2022, Festus needed information on NBC to corroborate his research on media broadcasting in Nigeria, but could not access its website. He later opted for an alternative.

On the 17th of August 2022, Festus, who is now a student at the National Broadcast Academy (NBA) in Lagos- a training arm of the Federal Radio Corporation of Nigeria (FRCN) wanted to access the site of NBC to confirm its duties- the site was broken. Not satisfied with his search, Festus visited the social media pages of the commission and clicked the web link provided hoping to be redirected accordingly. The link to the website (www.nbc.gov.ng) was inactive. 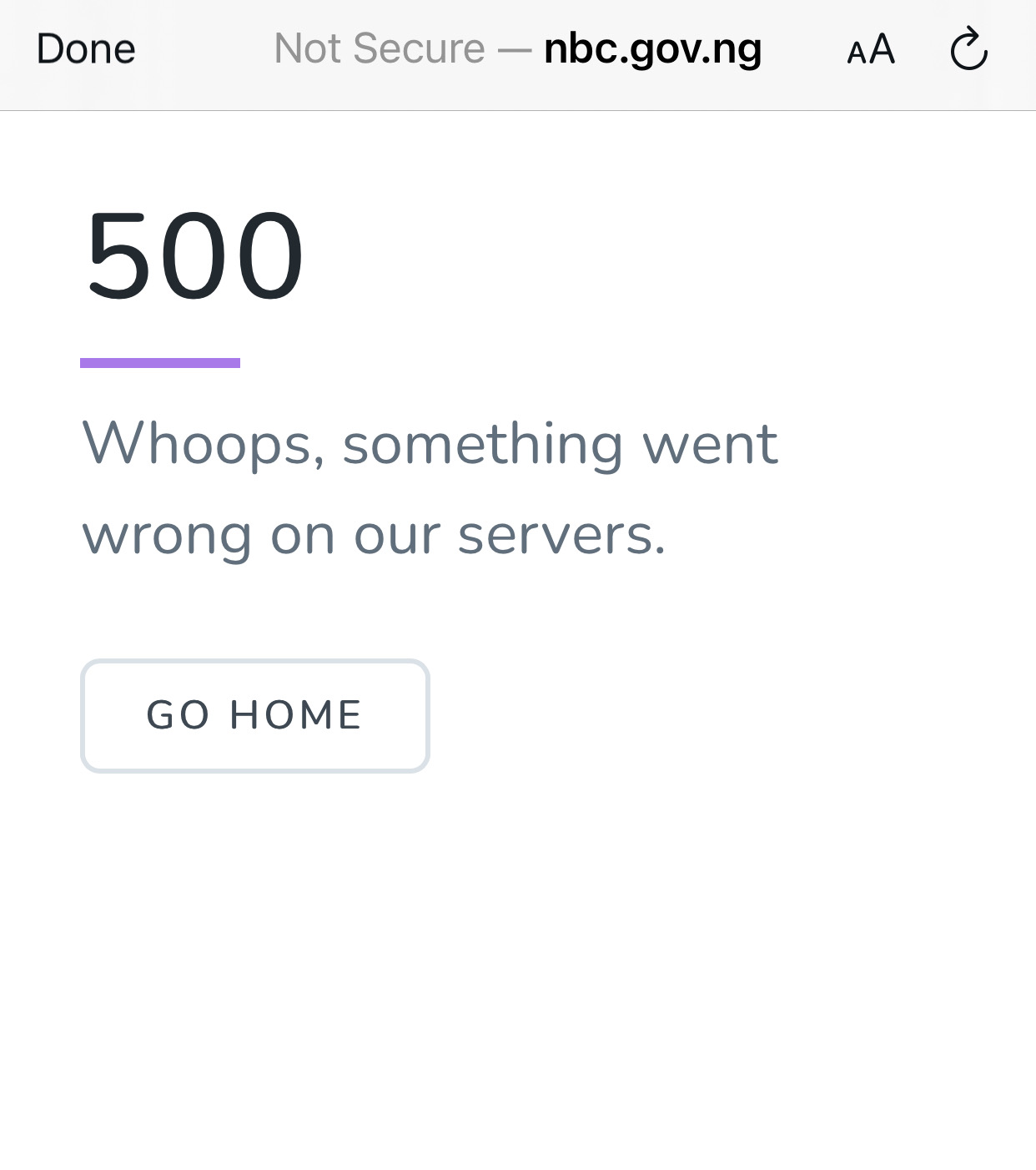 A screenshot of the inactive landing page of the NBC website

The NBC commission was set up on August 24, 1992, by Decree 38 of 1992 later amended as an act of the National Assembly by Act 55 of 1999, and now known as National Broadcasting Commission Laws of the Federation 2004, CAP N11 to among other responsibilities, regulate and control the broadcasting industry in Nigeria

The application is recommended after consideration, by the Minister of Information to the President —  who then grants radio and television licenses. The commission is currently headed by Bello Shehu Ilelah serving as director general.

On the 19th of August, 2022, NBC revoked the licenses of 52 broadcast stations They were said to have refused to renew their license. Some of the stations affected include African Independent Television (AIT) and its sister stations- Raypower FM owned by Dr. Raymond Dokpesi, Silverbird Television, and its sister stations —  Rhythm FM owned by Senator Ben Bruce, Ondo State Radiovision Corporation (OSRC), Space FM, etc.

While that announcement continued to raise a concern with several organisations like the International Press Center (IPC), SERAP and others calling for the cancellation of such an order, more worrisome is the inability of Nigerians and interested visitors to access information on the site of the commission.

On the Twitter and Facebook pages of  NBC, the link is made available. For anyone who visits the link, the response on the page comes back as an “error” which indicates that it is ‘expired’. It says “Whoops, something went wrong on our servers.” 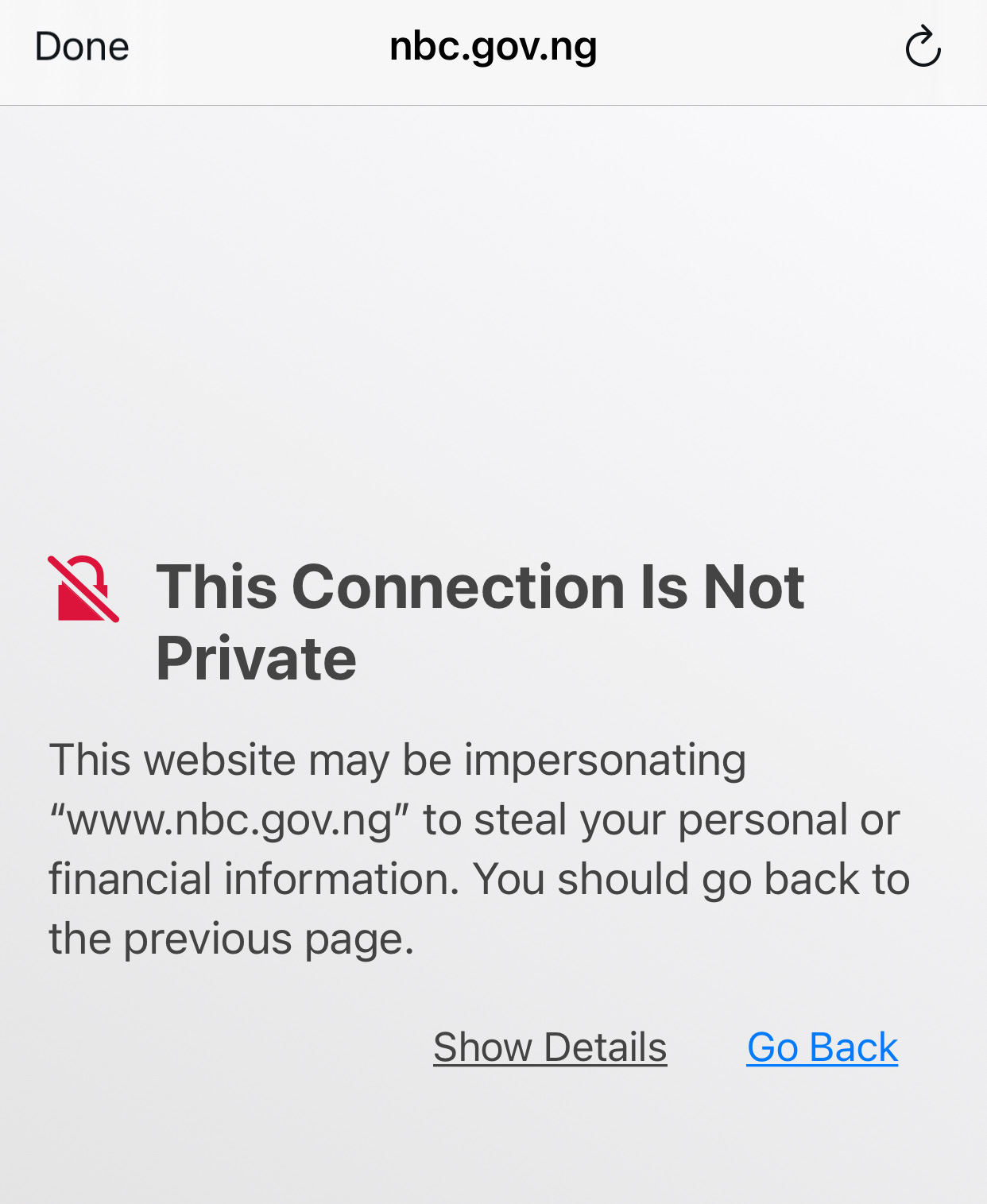 The site of a regulatory body like NBC should not be inactive- considering the number of researchers, media students, and professionals who want to read and access the activities and responsibilities of the commission for academic and research purposes.

Every website that has a domain with .gov indicates that it is government owned/related. The question remains if the commission is aware of its inactive website or if there is no fund to activate the website for easy accessibility.

nbc.gov.ng has a disclaimer close to its URL  stating that connection to the site is not secured, warning that sensitive information should not be entered on the site “because it could be stolen by attackers.”

The site was accessed through a mobile phone using different browsers, and thereafter accessed on a laptop- the result was the same site ‘error’.

NBC has continued to use its social media pages to disseminate information and press releases but beyond that, there should be an active site for the commission where visitors can access every relevant information including the Broadcast Code and licensing processes.

We went further to check the details about the NBC site. With the aid of website informer in gathering information, we found out that the domain name (nbc.gov.ng) was created on the 25th of December, 2008, and hosted by Galaxy Backbone Abuja Metro Network.

Galaxy Backbone is a network communications and data hosting infrastructure platform for public and private sector organisations. With headquarter at, 61 Adetokunbo Ademola Crescent, Wuse Ii, Abuja- Galaxy Backbone commenced operation in 2007 and is led by Muhammed Bello Abubakar, as its Managing Director/Chief Executive Officer. The organisation was incorporated in 2006 as a public enterprise of the Federal Government of Nigeria to operate a unified Information Communication Technology (ICT).

ROUNDCHECK verified that all of these domains are active and accessible (as of filing this report)- unlike that of NBC. Although a report from SiteAdvisor revealed that the NBC site (nbc.gov.ng) is good and safe, users cannot access it.

Following the recent decision to revoke licenses of 52 broadcast stations coupled with the fine on broadcast stations, more Nigerians and the international community are eager to access the Broadcast Code as well as the Code of Ethics of the Nigerian Broadcast industry. Also, a functional website of NBC will direct Nigerians to where they can get answers to questions raised- which NBC executives might not be able to directly respond to. If other domains are working- the NBC domain should also be ACTIVE.

EDITOR’s NOTE: As of the time of this check, ROUNDCHECK has sent a mail message to NBC and also copied Galaxy Backbone to notify them of these findings and the need to urgently REACTIVATE the NBC website for public accessibility.