A statement attributed to Peter Obi, a former governor of Anambra state and Presidential candidate of the Labour Party (LP), saying he “pulled 439 million people out of poverty” has been circulating online.

A statement attributed to Peter Obi, a former governor of Anambra state and Presidential candidate of the Labour Party (LP), saying he “pulled 439 million people out of poverty” has been circulating online.

The statement is an excerpt from a video where Peter Obi spoke in Kaduna State. 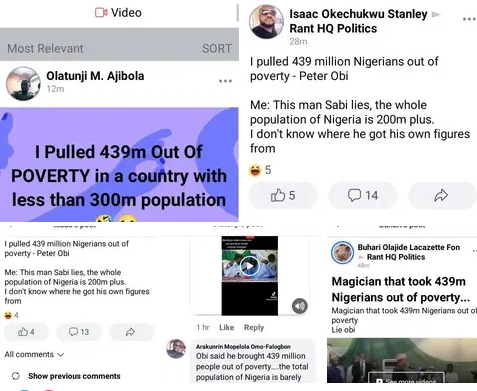 On Monday, 17th of October, 2022, Peter Obi participated in the Arewa Joint Committee Interactive Session in Kaduna to rub minds on some fundamental issues germane to the future of Nigeria. 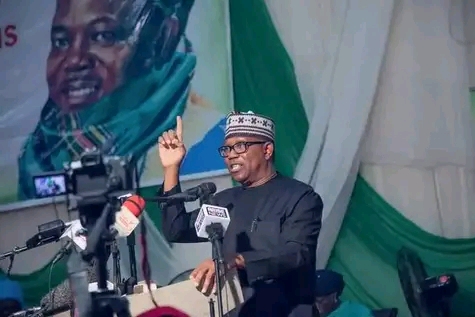 Some social media users later quoted him to have said that he pulled 439 million people out of poverty.

“I pulled 439 million people out of poverty – Peter Obi,” the viral quote read.

A keyword search on Facebook reveals that 1.3k people are talking about the statement (as of the time of this report).

Facebook influencers like Asiyah Aisha Alubankudi and Willy Ibima Jim-George both shared the video with the viral quote which respectively garnered 346 and 143 comments and 76 and 109 shares (as of the time of filing this report). 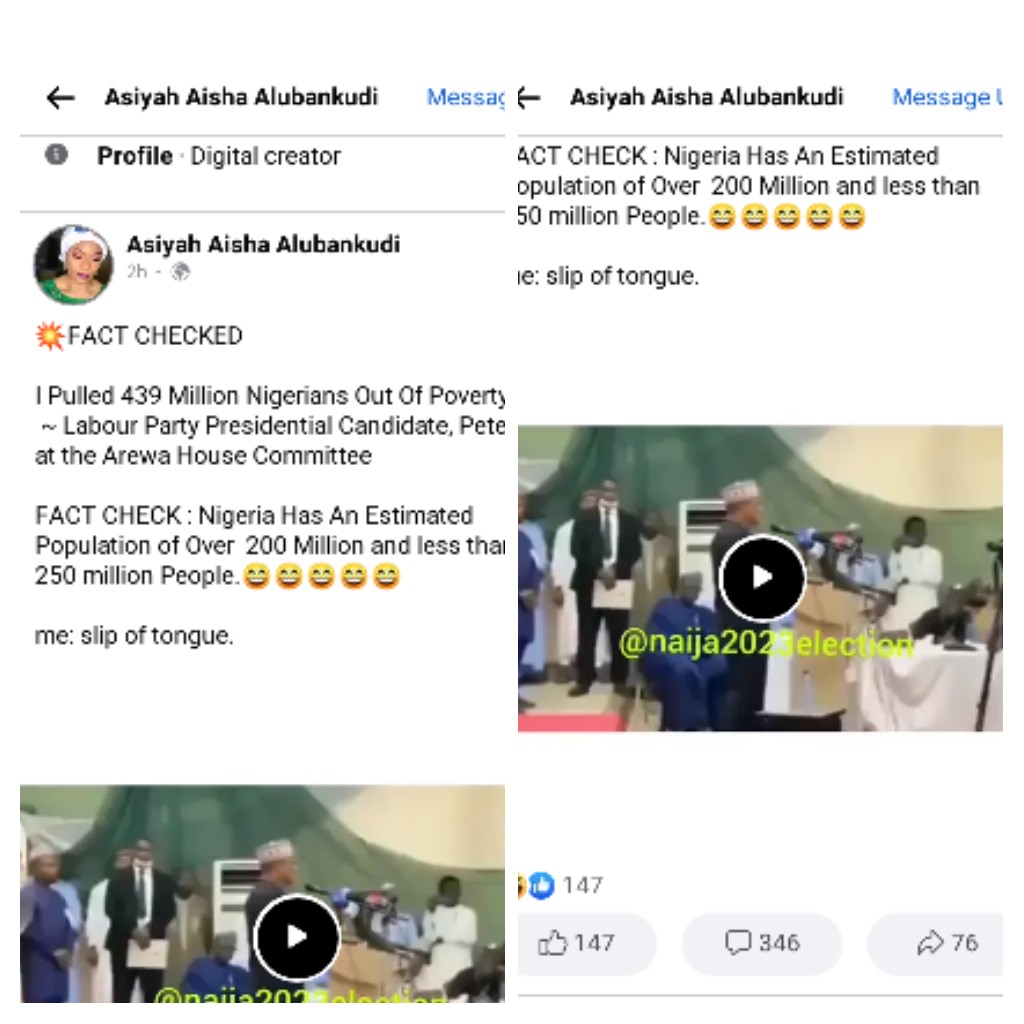 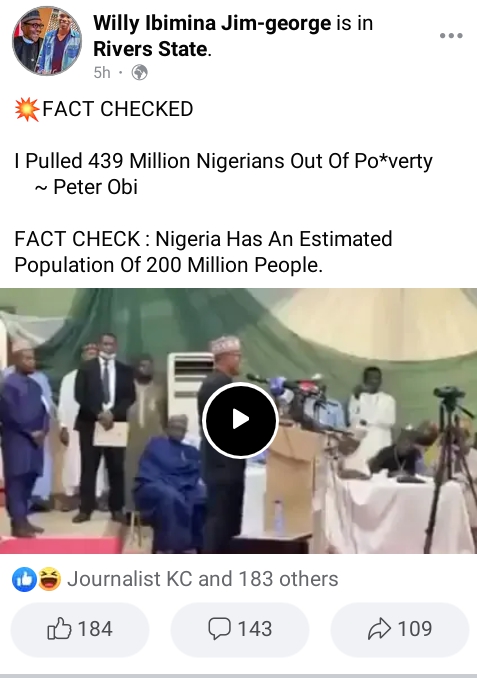 A verified Twitter user, Arabinrin Aderonke, and another user also tweeted the 14-second video captioned with the viral quote. 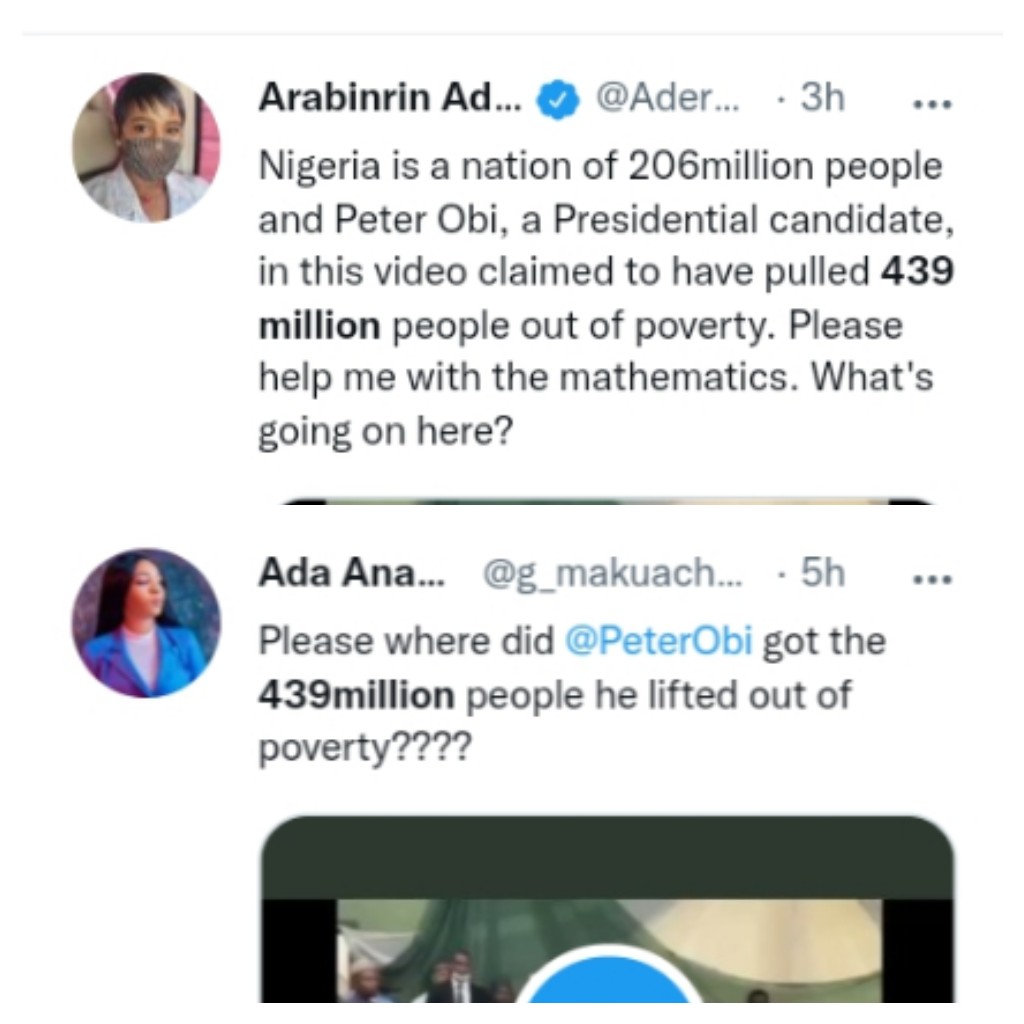 This claim has since been going viral with the video posted on different social media platforms.

Knowing that neither Anambra state (where Peter Obi was former governor) nor Nigeria (where he is contesting as President) has a population of up to 439 million, hence, we checked the claim.  Nigeria’s population is estimated at 200+ million.

The Original Video And What Peter Obi Said

ROUNDCHECK obtained the full video on YouTube for analysis.

Our findings revealed that the short clip that has been shared was cut halfway and taken out of context from the longer and original version.

The longer and original version is an 11-minute, 42 seconds video of Peter Obi addressing the Arewa Joint Committee.

Transcript of the original (longer) video:

“In Nigeria, we didn’t do it and we threw more people into poverty. But Anambra state was number one when it ended. Despite being number one, go to our schools. Our schools were closed for two years…”

The 14-second footage that is in circulation, excised (cut off) exactly at 0:06 – 0:20 timing, was taken from the original video that is eleven minutes and forty-two seconds long (11:42).

ROUNDCHECK found that the short footage was deliberately cut from its long and original context in a way that distorts the source’s intended meaning, a practice commonly referred to as “quoting out of context” or “misconstrued” which prompts audiences to form a false impression of the source.

With further research, ROUNDCHECK also found that the claim by Peter Obi that “it was MDG (Millennium Development Goals) that China mainstream into their development agenda and was able to pull 439 million people out of poverty” was indeed sourced from the Report on China’s Implementation of the MDGs (2000-2015) which was jointly launched by the Government of China in partnership with the United Nations (UN) System in China.

And speaking on the 2019 Multidimensional Poverty Index, the United Nations Development Programme administrator, Achim Steiner said “India lifted 271 million people out of extreme poverty in a 10-year time period from 2005–2006 to 2015–2016.”

This report found that over 640 million people across India were in multidimensional poverty in 2005/2006 and that fell steeply to slightly more than 365.55 million by 2016/2017—an impressive reduction of 271 million.

This is even 2 million more than what Peter Obi claimed (269 million).

Also according to The ICIR analysis of World Bank data. Forty-five million Vietnamese were lifted out of penury between 2002 and 2018, with poverty rates declining sharply from over 70 percent to below 6 percent. This is exactly as Peter Obi claimed.

In Nigeria, 40.1 percent of the total population was classified as poor according to the 2019 Poverty and Inequality in Nigeria Report by the National Bureau of Statistics (NBS).

“In other words, on average 4 out of 10 individuals in Nigeria have real per capita expenditures below 137,430 Naira per year. This translates to over 82.9 million Nigerians who are considered poor by national standards,” the report stated.

Also, according to Statista’s 2019 Poverty Headcount Rate in Nigeria by Area, Anambra state is ranked 8th in the 36 Nigerian states by the report with a poverty headcount rate of 14.8 percent.

Although Peter Obi did not categorically state any year in review while quoting the figures, our findings based on the recent data available have been analyzed above.

Findings showed that the viral video of the Labour Party’s Presidential Candidate in the forthcoming 2023 election in Nigeria, Peter Obi, was cut halfway and his statement was taken out of context to give a different meaning.

It was a MISSING CONTEXT. He was making a statement about how China, India, and Vietnam lifted their citizens out of poverty through MDGs: but the video was not posted in full, which gave the statement a different connotation.

The statement in the video was not about himself (Peter Obi) lifting 439 million out of poverty, but rather, the impact of MDGs in other countries when Nigeria could not leverage it.

This report was written under ROUNDCHECK’s Volunteers Project Network Cohort 2.