Kuda Bank Did Not Fold Up, See What Happened

There was a claim being shared across social media that Kuda Bank has folded up and customers should withdraw their money from the app.

Kuda Bank Did Not Fold Up, See What Happened

There was a claim being shared across social media platforms that Kuda Bank has folded up and customers should withdraw their money from the Mobile Application. 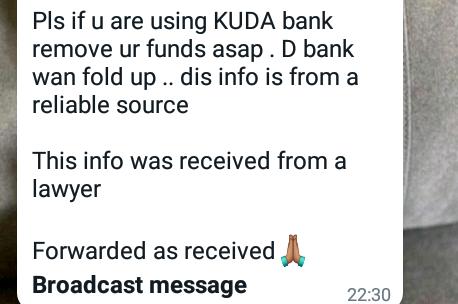 ROUNDCHECK discovered that the claim was trending on the 13th of November 2022  when users of the Kuda Bank Mobile Application were being logged out. Users could neither make transactions nor access their funds.

The claim reads, “Pls if u are using KUDA bank remove ur funds asap . D bank wan fold up ..dis info is from a reliable source This info was received from a lawyer” [sic].

ROUNDCHECK also noticed that the claim was posted on different social media platforms with the hashtag #kuda #kudabank and having similar content. 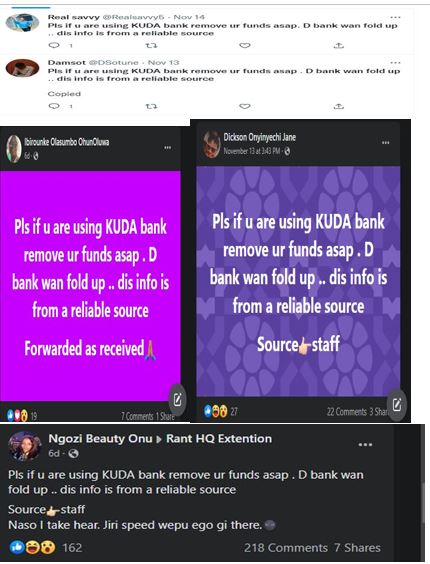 The reactions from the Facebook users screenshot above when calculated was 208 Likes, 247 Comments, and 11 Shares.

The comments were mixed reactions from people who were panicking about the sudden shutdown of the Kuda Mobile Application.

What You Need To Know About Kuda Bank

Kuda Bank under the company name, Kuda Technologies, is a Nigerian and UK-based fintech company founded in 2019 by Babs Ogundeyi and Musty Mustapha. The company which offers multiple payment options, including a widely accepted debit card issued in collaboration with Visa was named one of the seven World Economic Forum (WEF) African technology startups to watch in 2021.

Kuda is worth $500 million and has raised over $90 million in funding from investors such as Target Global and Valar Ventures.

From research, ROUNDCHECK discovered that Kuda Bank widened its capacity by extending to the United Kingdom on 10th November 2022, which led to the unexpected upgrading of the company’s Mobile Application.

The upgrade of the company’s Mobile Application took a while till it led to controversy from the customers, thinking the company was about to close down. ROUNDCHECK observed that the upgrade process led to the spread of the claim.

Going through the official Facebook page, Kuda refuted the claim saying “The all-new Kuda app is stable and working fine. If you haven’t downloaded the update on your app store, now is the best time. There’s so much to love about #themoneyappforafricans.”

ROUNDCHECK reached out to Kuda via mail to confirm the authenticity of this claim.

Kuda responded and tagged the claim as ‘untrue’.

“Your account is safe and secure with us and you don’t have to panic as Kuda isn’t going anywhere. You can always keep track of your account via the app. Please find more details about us on help.kuda.com” Kuda said in response to ROUNDCHECK’s inquiry.

ROUNDCHECK can conclude that Kuda Bank did not fold up, thereby making the circulating claim INCORRECT.

Message Sent To A Linkcredit Loan Defaulter Did Not Come From PUNCH
INCORRECT: United States Is Not Rejecting Dollar Printed Before 2021
(adsbygoogle = window.adsbygoogle || []).push({});