INCORRECT: United States Is Not Rejecting Dollar Printed Before 2021

Multiple online reports titled ‘USA Moves to Checkmate Dollar Stockpile in Africa’ and attributed to Reuters were widely circulated on social media claiming that by January 31, 2023, the United States dollar notes issued before 2021 will no longer be accepted as legal tender.

INCORRECT: United States Is Not Rejecting Dollar Printed Before 2021

Multiple online reports titled ‘USA Moves to Checkmate Dollar Stockpile in Africa’ [227-word] and attributed to Reuters were widely circulated on social media claiming that by January 31, 2023, the United States dollar notes issued before 2021 will no longer be accepted as legal tender. 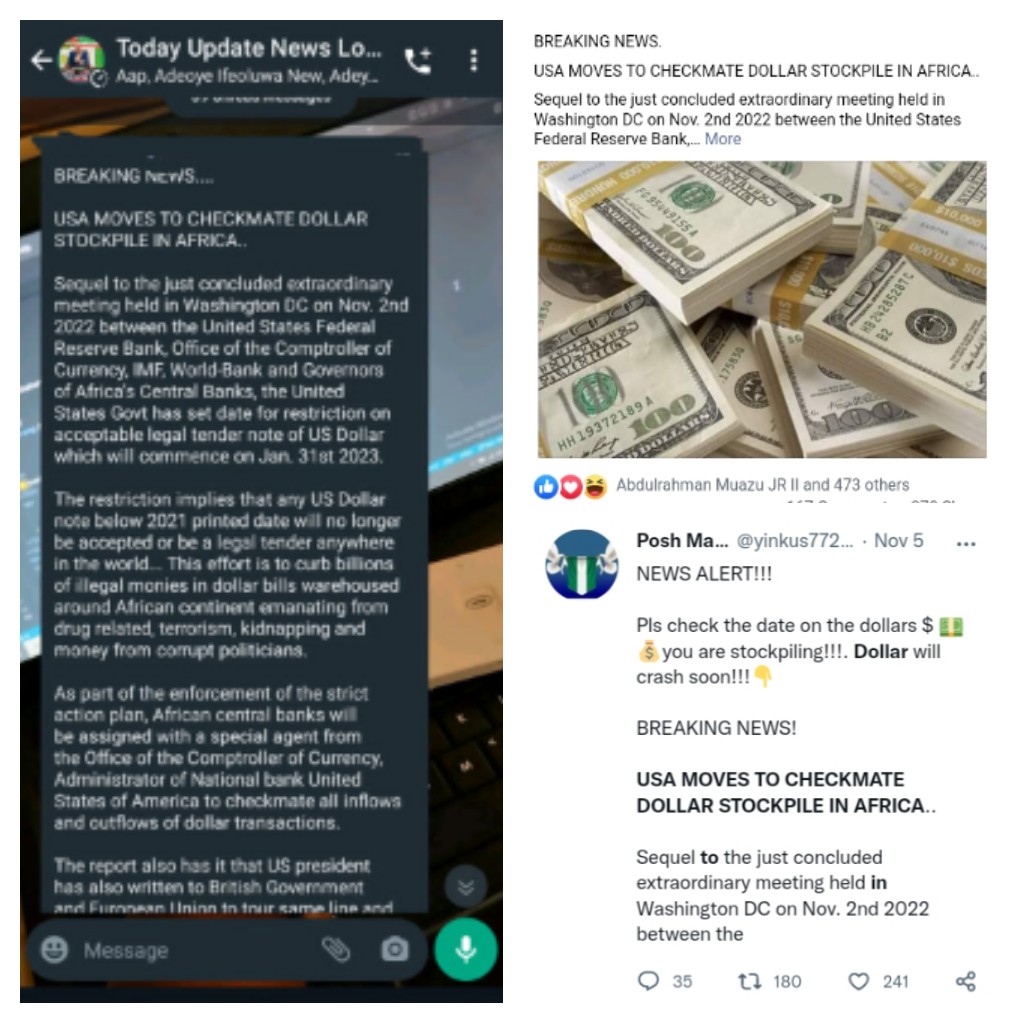 A screenshot of the claim.

The report claims that the government of US “has set a date for restriction on an acceptable legal tender note of US Dollar which will commence on Jan. 31st, 2023”.

“The restriction implies that any US Dollar note below the 2021 printed date will no longer be accepted or be a legal tender anywhere in the world… This effort is to curb billions of illegal monies in dollar bills warehoused around African continent emanating from drug-related, terrorism, kidnapping and money from corrupt politicians,”

“Should this action be implemented come January 2023 as reported, Nigerian corrupt politicians will be worse hit.” the report reads.

The claim is coming over a week after the Federal Government of Nigeria announced the redesign of some naira notes. On October 26, the Governor of the Central Bank of Nigeria (CBN), Godwin Emefiele said the apex bank would issue redesigned N200, N500, and N1,000 notes, effective December 15, 2022, while the new and existing currencies will remain legal tender and circulate together until January.

According to the Governor, some factor that influenced the redesign of the naira notes is the “significant hoarding of banknotes by members of the public”. He added that statistics show that “over 80 percent of currency in circulation are outside the vaults of commercial banks”.

ROUNDCHECK conducted a keyword search on the claim and found that the claim appeared in several online blog sites like The Heritage Times, The News Nigeria, and also on Nairaland, a well-known social networking platform in Nigeria, all entitled “USA moves to checkmate dollar stockpile in Africa”.

However, ROUNDCHECK observed that the source of the several reports was attributed to Reuters – one of the largest news agencies in the world established in London in 1851 by the German-born Paul Reuter.

ROUNDCHECK also checked the official website of the US Department of the Treasury, the National Finance and Treasury Office of the federal government, and there were no announcements related to the claim.

Further checks also revealed that no reputable news media, both in the US and Nigeria published reports on dollar redesign.

Meanwhile, information via the US Federal Reserve Board website reveals that the US currently issues seven denomination of dollar notes, which includes $1, $2, $5, $10, $20, $50, and $100

And according to information available on the website of the US Currency Education Programme, the current design of the $100 note, issued on October 8, 2013, is the latest denomination to be redesigned.

The US Currency Education Programme (CEP) which provides education, training, and information about federal reserve notes emphasizes that “it is U.S. government policy that all designs of U.S currency remain legal tender, regardless of when they were issued”.

The US CEP added that the policy includes “all denominations of federal reserve notes, from 1914 to the present”.

It further stated that “All U.S. currency issued since 1861 is valid and redeemable at its full face value.”

We also observed that the claim has been checked by other fact-checking newsrooms here.

Findings by ROUNDCHECK reveal that neither Reuters nor other credible media reported such news on the alleged “USA moves to checkmate dollar stockpile in Africa”.

Therefore, the claim that the United States has redesigned dollar notes and will reject all old notes from January 2023 is INCORRECT.

Kuda Bank Did Not Fold Up, See What Happened
Claims Made By AAC Presidential Candidate, Sowore During Town Hall Debate
(adsbygoogle = window.adsbygoogle || []).push({});