INCORRECT: DSTV Did Not Add New Channel 240 For Saudi Arabia’s League Because Of Ronaldo’s  Move To Al-Nassr

INCORRECT: DSTV Did Not Add New Channel 240 For Saudi Arabia’s League Because Of Ronaldo’s  Move To Al-Nassr 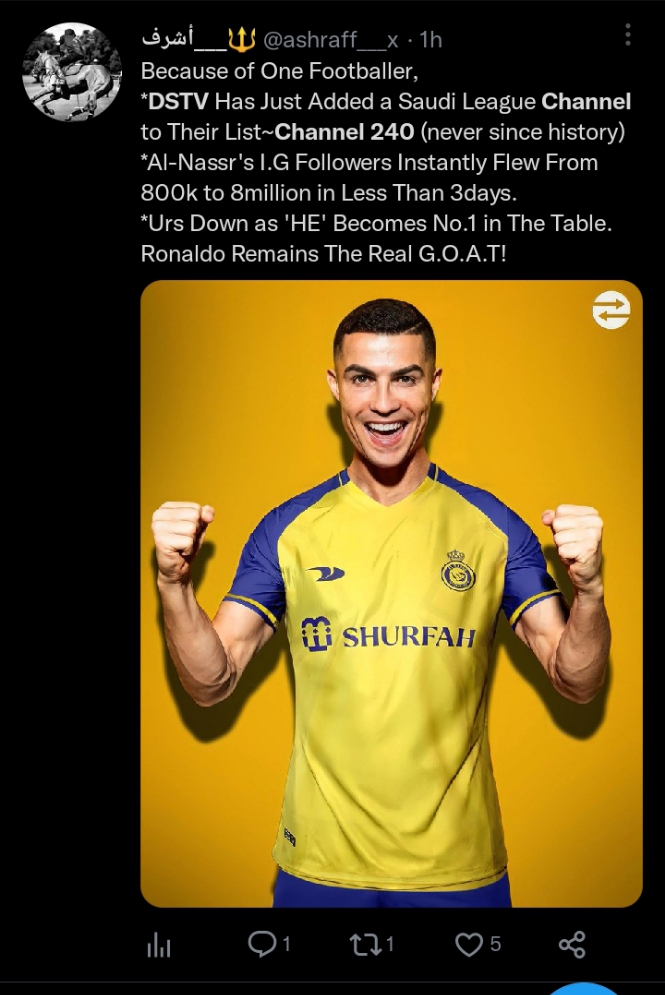 Viral messages on different social media platforms from December 2022 claimed that Digital Satellite Television (DSTV)– a Sub-Saharan African direct broadcast satellite service owned by MultiChoice and based in Randburg, South Africa– has added Saudi League to its channel (Channel 240) after the Portuguese international striker and five-time Ballon d’or, Cristiano Ronaldo was announced by Al-Nassr FC, a Saudi Arabian club as their new player. 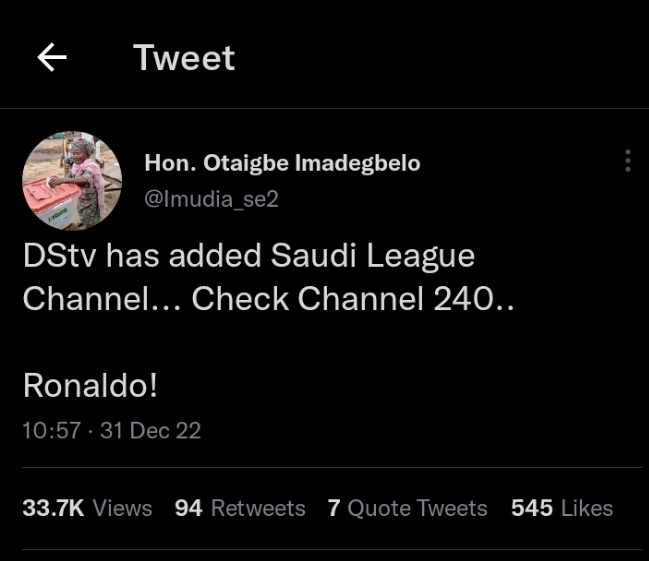 Similarly, on January 3, 2023,  another Twitter user, @bankychummZ tweeted “Just in… Dstv has 240 as a Saudi sport channel… All for one person… Why has France ligue 1 not been airing on Dstv yet after all this while.”

A close check (as at the time of filing this report) on the post shows that the tweet was viewed by 783 persons, with nine retweets and 24 likes on the same day. 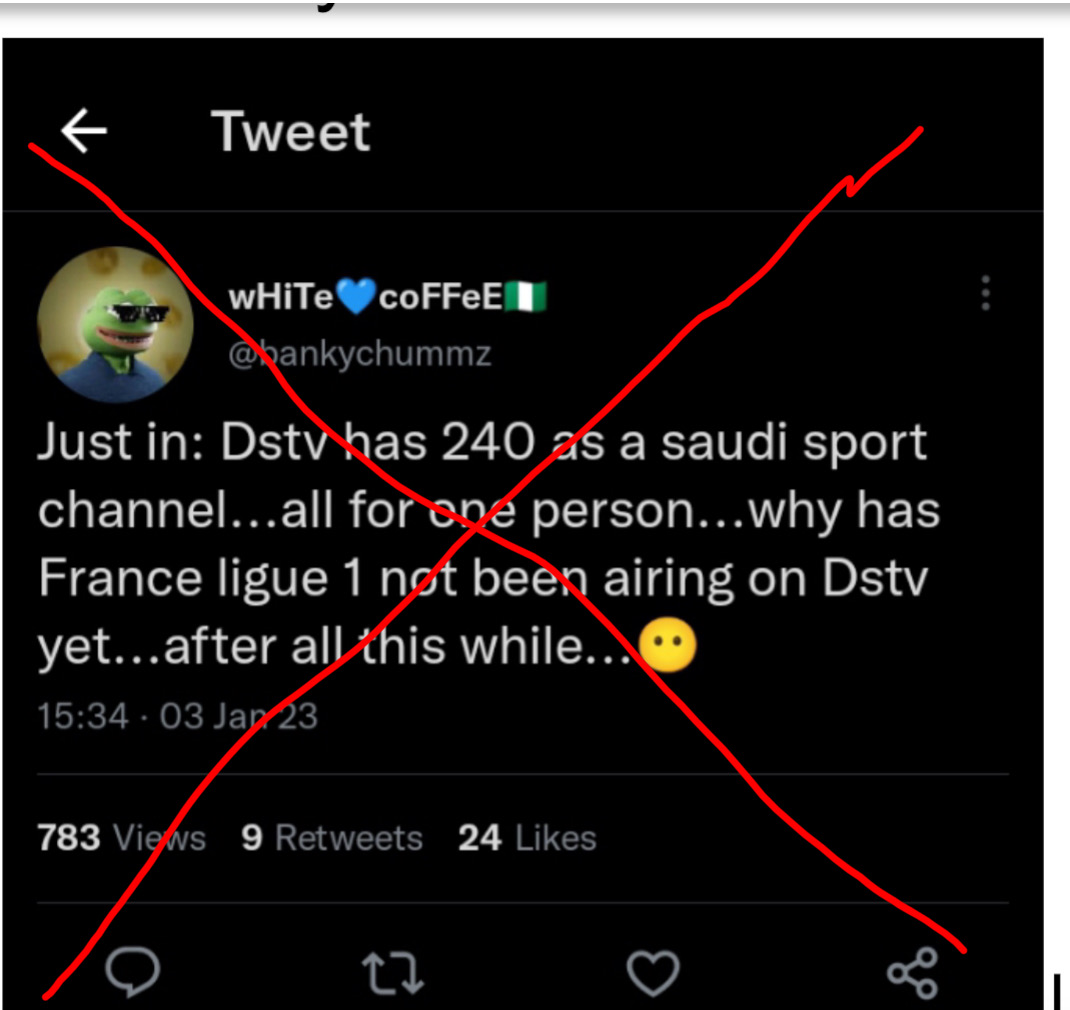 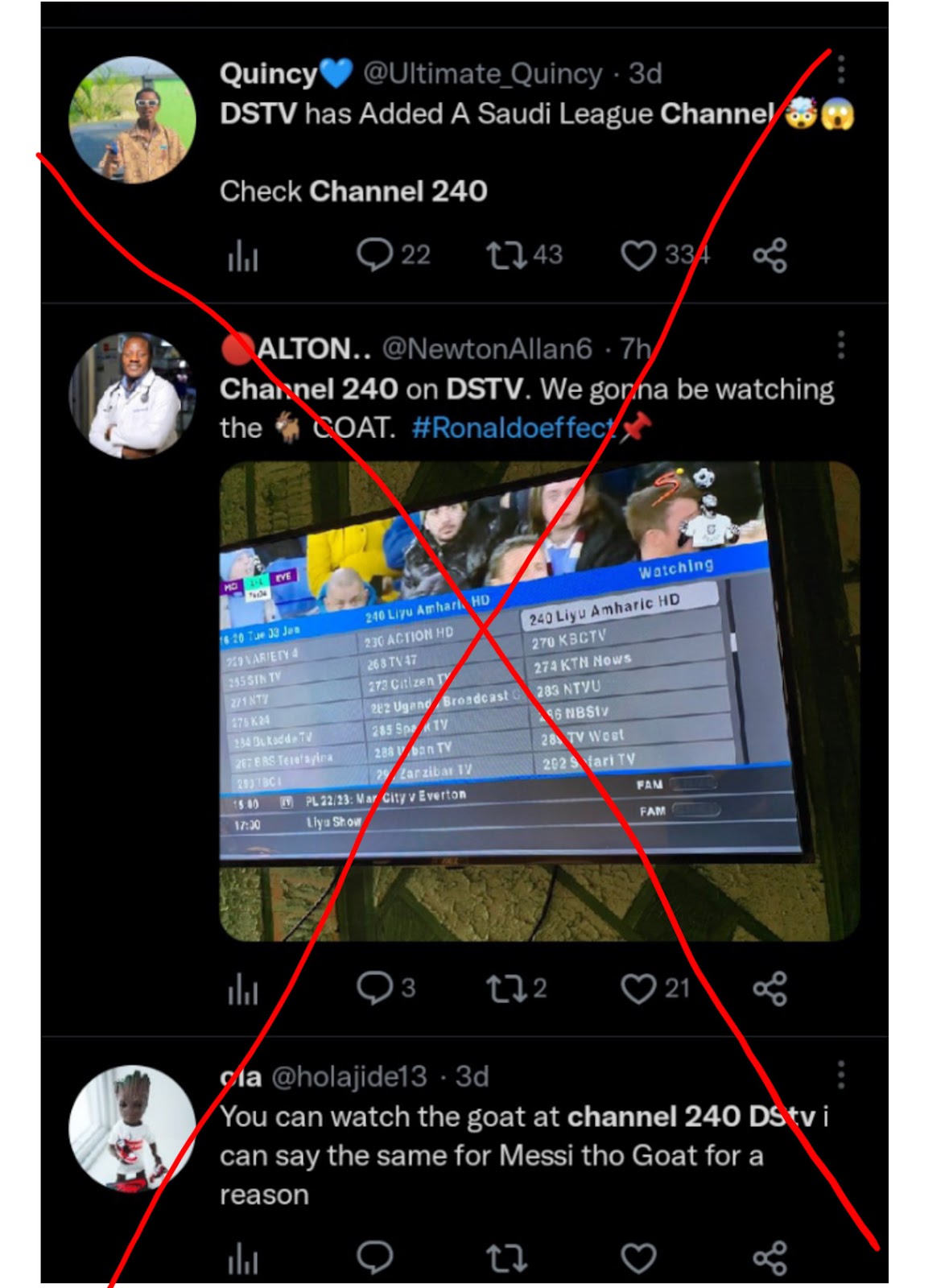 A check conducted shows that the news started trending from December 31, 2022 (after the announcement of Ronaldo joining the Saudi Arabia club) up till the time of this report.

Also on Facebook, we found out that the same news circulated. On Monday January 2, 2023 at exactly 9:46 am (WAT), a Facebook user with the name Juntiano Jude Ikpozu posted on his page that DSTV has added Channel 240 for Saudi Arabia league where fans can now watch Ronaldo. 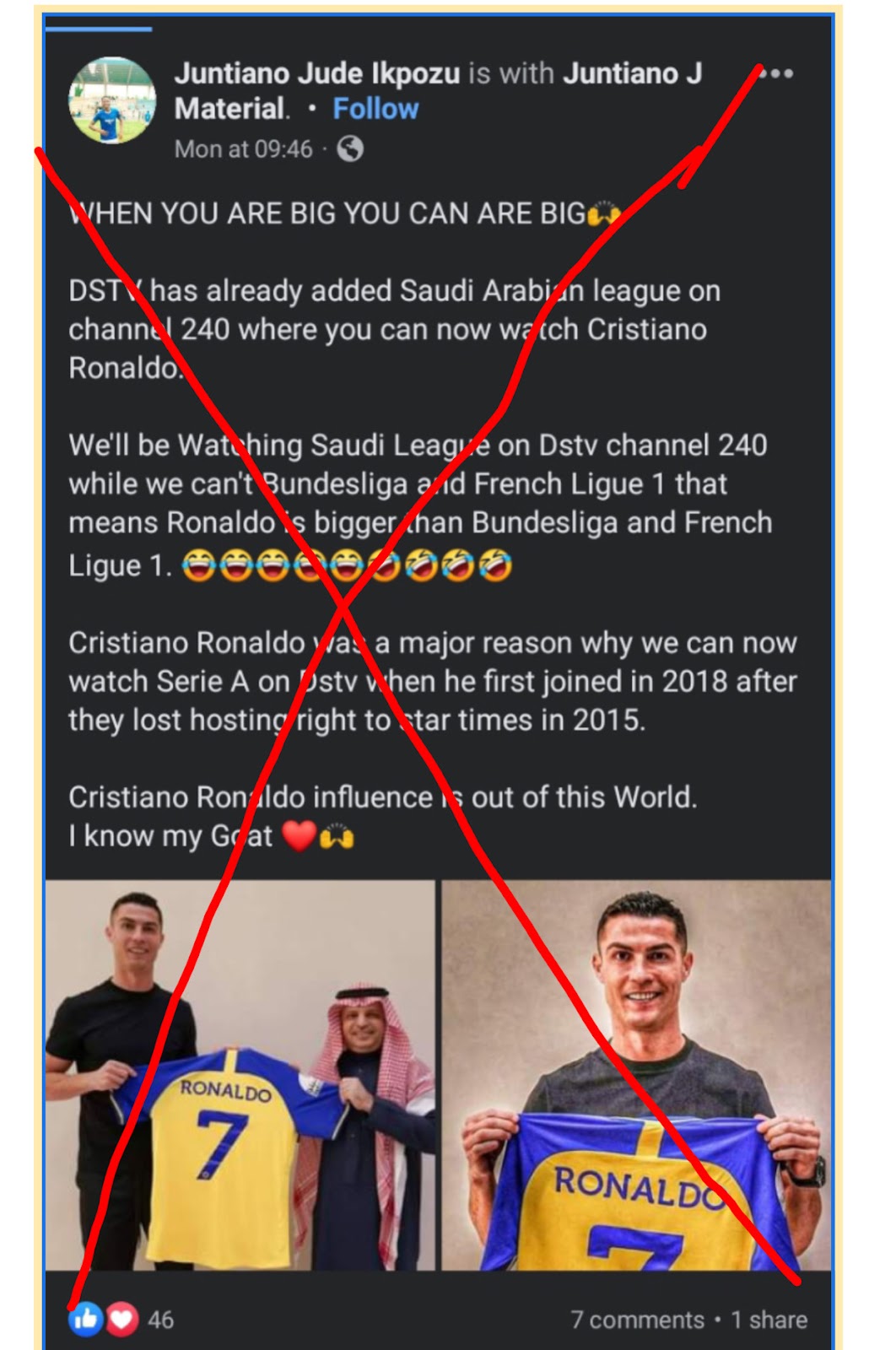 Full text of Ikpozu’s post: “WHEN YOU ARE BIG YOU CAN ARE BIG. DSTV has already added the Saudi Arabian league on channel 240 where you can now watch Cristiano Ronaldo.

“Cristiano Ronaldo was a major reason why we can now watch Serie A on Dstv when he first joined in 2018 after they lost hosting right to star times in 2015. Cristiano Ronaldo’s influence is out of this World. I know my Goat”

Another user, Opti Smith posted a video record of his plasma TV with a caption that the channel is now showing the Saudi Arabia league due to Ronaldo’s influence, adding that the language is in Arabic.

We found out that the video, though not in English language has 150 views,  3 comments and 14 likes (as at when filing this report). 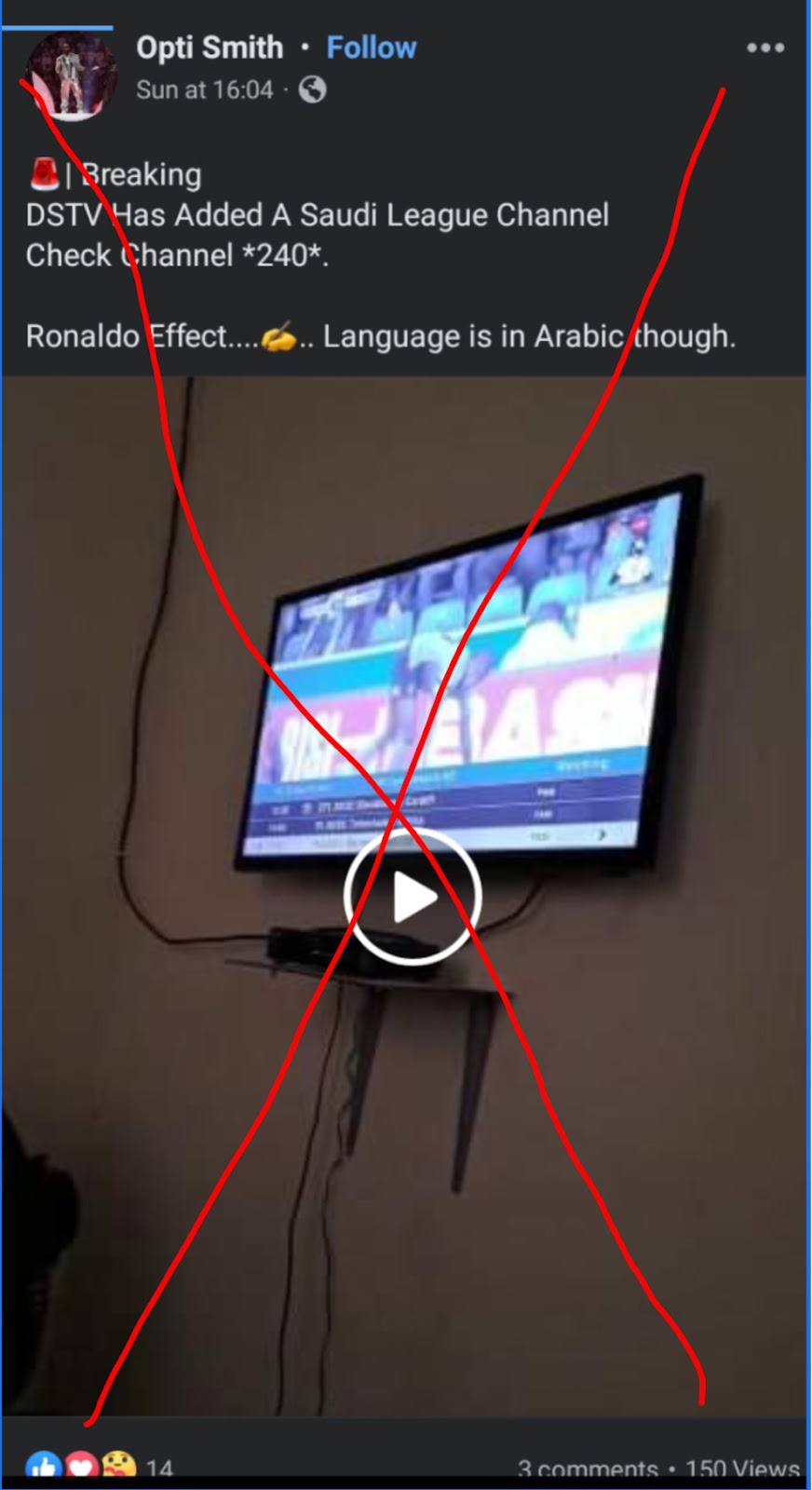 Further checks by ROUNDCHECK revealed that the claim was also circulated on Whatsapp status. 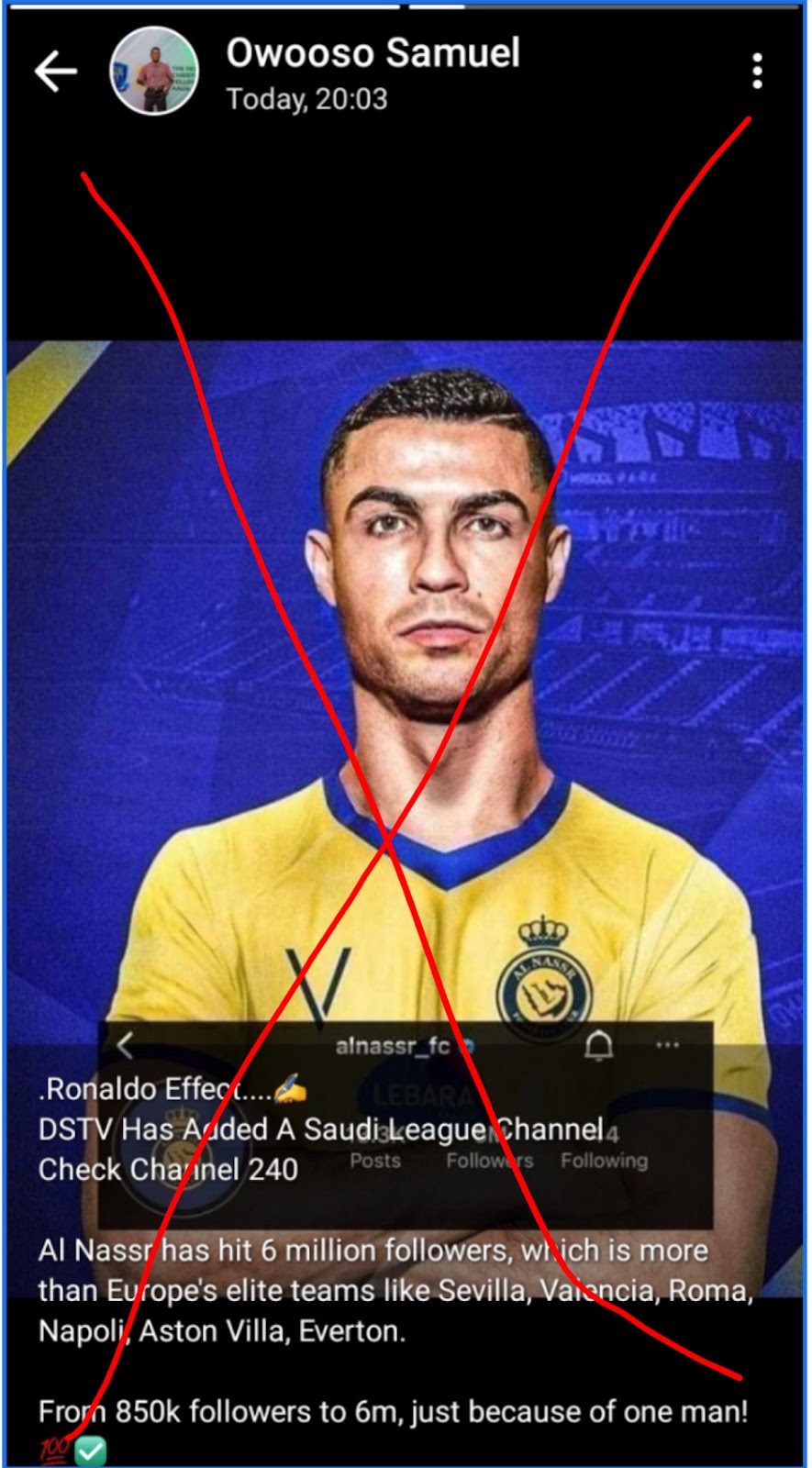 The claim has also been published here on Nairaland, a Nigerian-based online forum.

Through a keyword search on Google, the claim was also found on a blog, theGeniusmedia with scanty information and screenshot of DStv and Al-Nassr Instagram page.

The club announced that Ronaldo’s contract will run for two-and-a-half years until June 2025, with a total salary of €200m (£177m) per year with commercial agreements included.

The Portuguese Superstar was officially unveiled by Al-Nassr as a player on Tuesday, January 3, 2023, at Mrsool Park, Saudi Arabia.

Information obtained from DSTV website shows that Channel 240 was launched as a racing channel.

A part of the launching message shown on the official DSTV website said “MultiChoice and 4Racing usher in Channel 240 as an exciting new world of broadcast entertainment for the horseracing industry.” 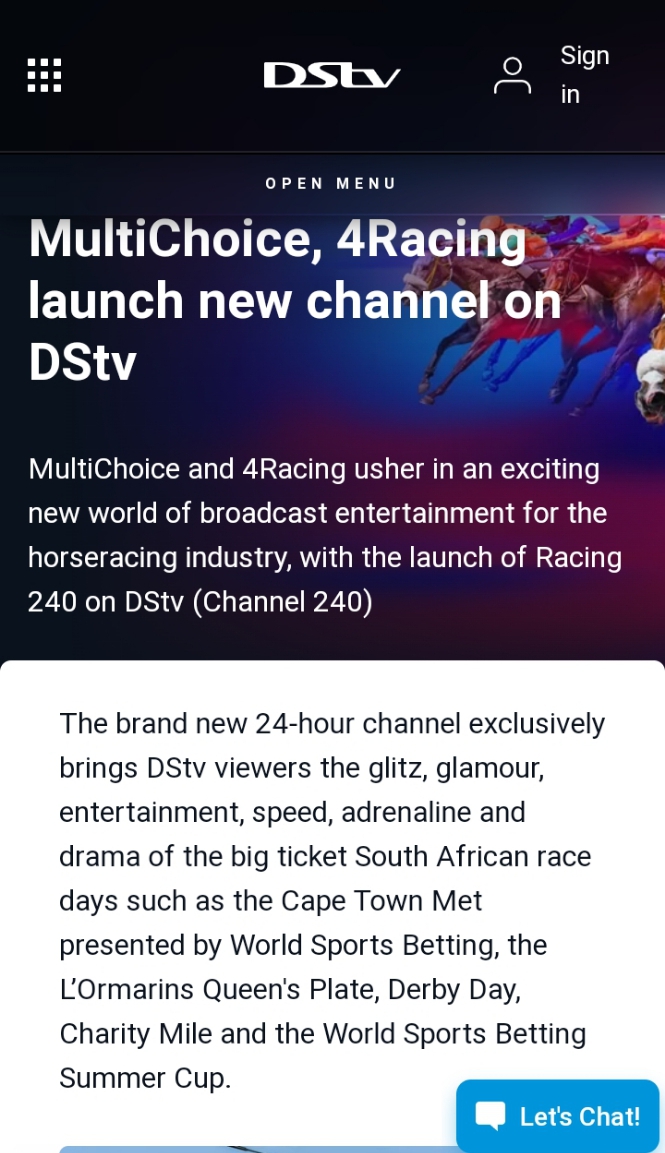 “Racing 240 is a 24- hour horse racing channel operating under the auspices of 4RacingTV and is available in South Africa to all DStv Premium, Compact Plus, Compact, Family and Access customers on DStv (Channel 240).”

This confirms that Channel 240 also known as Racing 240 existed before Ronaldo’s move to Saudi Arabia’s club, Al-Nassr in December 2022. It is a horse racing channel and wasn’t created to show Saudi Arabia’s league.

Also, ROUNDCHECK reached out to DSTV via Facebook message and email to confirm the credibility of the news making round that a new Channel 240 was added for Saudi Arabia league because of Ronaldo’s move.

DSTV revealed that it has no such information on the claim.

Full text of the reply: “Hello, sincere apologies. Please be informed that we currently do not have information on the below request. Do revert back for further assistance.  Thank you Chil91”.

As at the time of this report, there is no official announcement from DSTV that a new channel has been added to accommodate Saudi Arabia’s league. The circulating claim is created to mislead members of the public.

Checking The 2022 World Cup Valuable Squads That Witnessed The Biggest Rise In Eight Years
After ROUNDCHECK’s Report, DStv Confirms They  Have No Rights For Saudi Arabia’s League
(adsbygoogle = window.adsbygoogle || []).push({});