A viral link circulating on social media claimed that the Federal Civil Service Commission has commenced a massive recruitment exercise of personnel into her Ministries, Departments and Agencies for 2022/2033.

A viral link circulating on social media claimed that the Federal Civil Service Commission has commenced a massive recruitment exercise of personnel into her Ministries, Departments and Agencies for 2022/2033.

Accompanied by a fake link, the claim stated that over 16,000 Nigerians have been recruited across the 36 States of Nigeria; and It is being forwarded to different WhatsApp groups, at the time of filling this report. 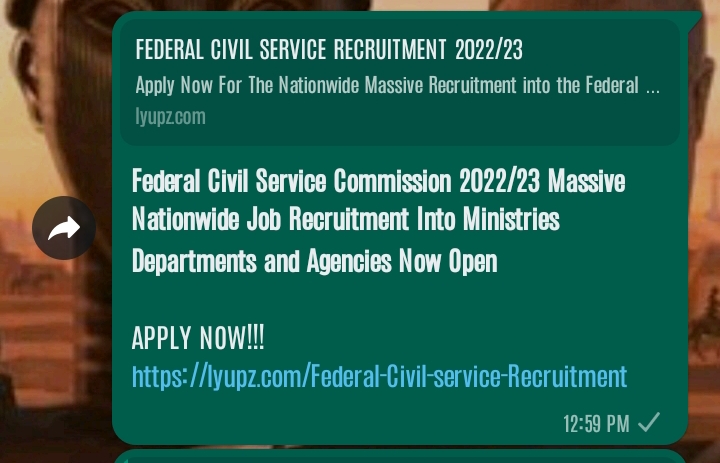 A screenshot of the claim seen on a Whatsapp group.

The Federal Civil Service Commission (FCSC) is a government agency in Nigeria operating under the Ministry of the Interior and has the mandate of appointing, posting, promoting, and exercising disciplinary functions over employees of the Federal government otherwise known as Civil Servants or Public Servants.

The current Chairman is Dr. Tukur Bello Ingawa, and the current Permanent Secretary is Dr. Mary A. Ogbe.

ROUNDCHECK found out that a click on the web link changes from the initial link provided to an untraceable and suspicious link (https://recriutment.online/#!).

The user interface of the website is similar to Facebook with a slot for comments and reviews that seem suspicious; and there is a section with the number of applicants already recruited- that is increasing in thousands within the space of a few seconds.

Interested applicants are to fill in their valid information which includes the ‘Full Name, Contact Address, Phone Number and State of Residence’ to proceed to the next section of the application adding that the application and slot for recruitment are limited.

Applicants are then requested to share the web link to 5 Whatsapp groups and 15 contacts (friends) on Whatsapp after which they will be automatically directed to an ‘interview page’.

ROUNDCHECK observed that a valid recruitment platform will never go through this process.

All of these above steps and instructions are part of what had been previously fact-checked to be a malicious pattern to collate the personal details of unsuspecting applicants.

A background check with SCAM ADVISER revealed that the website has a very low trust score and it has already been flagged as suspicious.

Scam Adviser added that the website does not have many visitors,  has many low-rated websites on the same server, and has garnered mainly negative reviews since its creation.

A general review indicated that any link with yupz are fake and created for gathering people’s information and data.

Using Whois, (another website tool) to track the link revealed that the site is unavailable.

The Civil Service recruitment information is always accessed through its original page.

No Recruitment Update From FCSC

A close check on FCSC social pages also revealed that no recruitment update was announced.

Information on the recruitment and appointment page of the commission’s official website had no information about the claim.

In a statement signed by the Permanent Secretary of the Commission, Dr. Mary Ogbe, the general public were alerted that the advertised recruitment does not emanate from the FSCS. The statement was posted on November 16, 2022 and made available on its official website.

“…it is untrue..the general public is advised to disregard the announcement on the purported recruitment,” the statement reads.

It added that the FCSC does not patronise social media for adverts and every recruitment exercise is advertised and made available on its official website.

The viral WhatsApp message claiming that the Federal Civil Service Commission Is recruiting nationwide with a malicious link is fake and  INCORRECT.

The claim and the link are created to steal sensitive details of unsuspecting and members of the public.

The report is published under the ROUNDCHECK’s Volunteers’ Network Project cohort 2.

No, Canada Is Not Issuing Visa Lottery. The Link Is Fake
HOAX: Femi Otedola Not Giving Out #20,000 Grants For 60th Birthday Celebration
(adsbygoogle = window.adsbygoogle || []).push({});