On August 20, 2022, the Accord party presidential candidate, Christopher Imumolen, made several claims in an interview with a TVC correspondent, Precious Amayo on the Political standpoint programme.

On August 20, 2022, the Accord party presidential candidate, Christopher Imumolen, made several claims in an interview with a TVC correspondent, Precious Amayo on the Political standpoint programme.

ROUNDCHECK analysed some of these claims and discovered them to be INCORRECT. 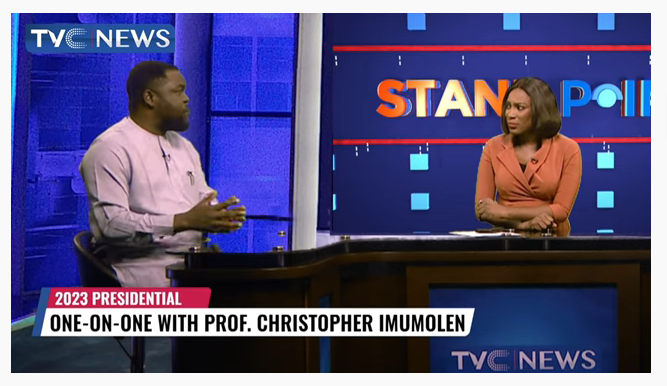 Christopher Imumolen is an educationist, a Nigerian Politician, and the founder of Joint Professional Training and Support International Limited (JPTS) and UNIC Foundation, a non-profit, non-governmental organization. On June 4, 2022, Imumolen emerged as the presidential candidate of the Accord Party for the general election in 2023.

Imumolen made several claims and ROUNDCHECK has identified some of these claims below.

“In 2009, when the American tower were bombed, immediately a policy was established called Homeland Security.”

“We have more than 4000 mineral resources in Nigeria.”

“We have about 350,000 police officers in the country.” Referring to Nigeria.

The Nigeria Police Force (NPF) is the principal law enforcement agency in the country. Available records reveal no specific number of police personnel in the country.

According to the International Criminal Police Organization (INTERPOL), an intergovernmental organization with 195 member countries (Nigeria included), there are more than 350,000 men and women police personnel covering all 36 states of the country.

ROUNDCHECK noticed that the 371,800 police personnel have been cited in other publications, even dated back to 2014, with no major source attributed.

After observing that the information is not disclosed on the NPF website, ROUNDCHECK consistently reached out to the Police Force PRO, CSP Olumuyiwa Adejobi, through calls, messages, and social media platforms.

We are yet to get a response as at the time of this report.

Hence, we cannot authoritatively ascertain the number of Police officers in the country, but available figures put it at 371,800 above.

The claim is UNCONFIRMED.

“In 2009, when the American tower were bombed, immediately a policy was established called Homeland Security.”

The  Department of Homeland Security (DHS) is the federal executive agency in charge of public security in the United States. DHS is responsible for counterterrorism, cybersecurity, detection and protection against chemical, biological and nuclear threats to the homeland, and response to disasters.

Contrary to what Imumolen claimed, DHS was established in 2002 by the 43rd American President, George Walker Bush.

Our check revealed that the American tower (Twin Towers) was bombed on September 11, 2001, in terrorist attacks by the militant Islamic extremist network, al-Qaeda.

Hence, the claim is INCORRECT– while the American Tower was bombed in 2001, Homeland Security was established in 2002 after the attack.

“We have more than 4000 mineral resources in Nigeria.”

A mineral resource is a concentration or occurrence of mineral materials of intrinsic economic interest in or on the earth’s crust in such form and quantity that there are reasonable prospects for eventual economic extraction. Mineral resources are non-renewable and include metalic and non-metalic.

According to the Nigerian Government, there are 74 mineral resources (Natural resources) in the country.

Meanwhile, Imumolen didn’t state any source for his data.

The claim of “more than 4000 mineral resources in Nigeria” is INCORRECT.