Claim Of Foreign Pilot Arrested By Nigerian Troops With Weapons In Niger State Is INCORRECT. Picture Not In Nigeria

A Twitter user claimed that Nigerian troops have arrested a foreign pilot in Niger state, who supplies weapons to bandits.

Claim Of Foreign Pilot Arrested By Nigerian Troops With Weapons In Niger State Is INCORRECT. Picture Not In Nigeria

A Twitter user, Mr Utility (@utilityopeyemi), claimed that Nigerian troops have arrested a foreign pilot in Niger state, who supplies weapons to bandits.

This viral claim with pictures has been circulating on social media platforms including Twitter, and Facebook, and forwarded many times on WhatsApp.

The post, which was made on the 26th of August, 2022 has 3 likes as of the time of this report. But on other mediums, it has generated several likes, shares, and comments. 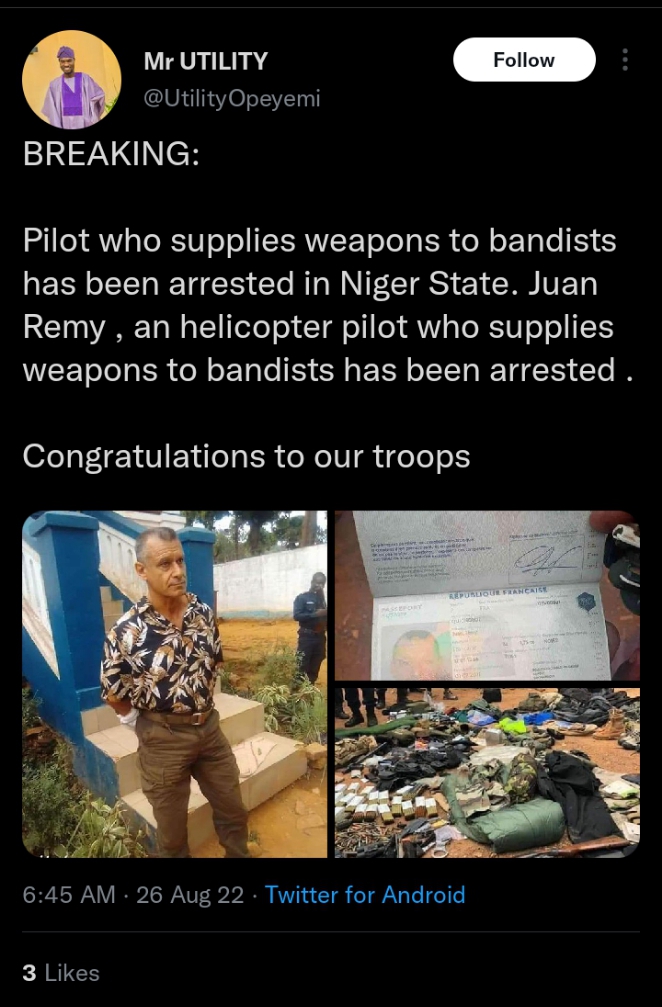 A screenshot of the claim

ROUNDCHECK also observed that the claim has been circulated on different new media platforms— blogs. ROUNDCHECK subjected the pictures to google reverse image search and realized that the pictures in the said claim were attached to a post made by a French website-Dakaractu in May 2021.

The headline of the report after being translated reads: Central African Republic: A 55-year-old French national arrested with an impressive military arsenal It also states that the Central African authorities through the Public Prosecutor’s Office of Bangui announced that they have opened an investigation to clarify the circumstances of the existence of this important military arsenal.

This was also confirmed by other media platforms, here, here, and here.

In June 2021, REUTERS reported that he ( Juan Rémy Quignolot) was charged with espionage (the practice of spying or using spies to obtain information about the plans and activities especially of a foreign government or a competing company) in the Central African Republic, a month after he was arrested with a cache of weapons and ammunition at his home.

The Niger State Police, in a conversation with ROUNDCHECK, described the claim as false.

In another statement titled “NO FOREIGN NATIONALE DISTRIBUTING WEAPONS ARRESTED IN NIGER STATE” and signed by the Public Relations Officer, DSP Wasui Abiodun, the force noted that such an incident never occurred in Niger State.

“It is also pertinent to state that there has never been a report of any foreign Nationale with helicopters distributing weapons to hoodlums in the State.”

“The Commissioner of Police, Niger State Command CP Monday Bala Kuryas, urges members of the public to disregard such a report as it is aimed at creating unnecessary chaos in the public domain,” a part of the statement reads.

We found that the picture wasn’t taken in Nigeria and it is not as current as claimed in viral claims.

ROUNDCHECK can confirm that the post claiming that a foreign pilot was recently arrested in Niger state with ammunition is INCORRECT.

No, Nigerian Police Is Yet To Commence 2022 Police Constable Recruitment
(adsbygoogle = window.adsbygoogle || []).push({});