The 2022 FIFA World Cup held in Qatar witnessed some of the big squads in football history. Some of these squads have high price tags due to the value placed on their players.

The 2022 FIFA World Cup held in Qatar witnessed some of the big squads in football history. Some of these squads have high price tags due to the value placed on their players.

Surprisingly, some of these high-value squads that witnessed an increase in eight years did not make it out of their group stage but a low-value Morocco team made it to the semifinal.

This article talks about the valuable squad at the 2022 World Cup that rose in value within the last eight years – since the 2014 World Cup.

England topped the list of teams whose transfer values have increased outlandishly over the past decade.

Despite cash being king in the world of football, a study conducted by Bonusetu has revealed much about the changing finances within the game, and one team defies the odds to become the semi-finalists with the lowest valuation. 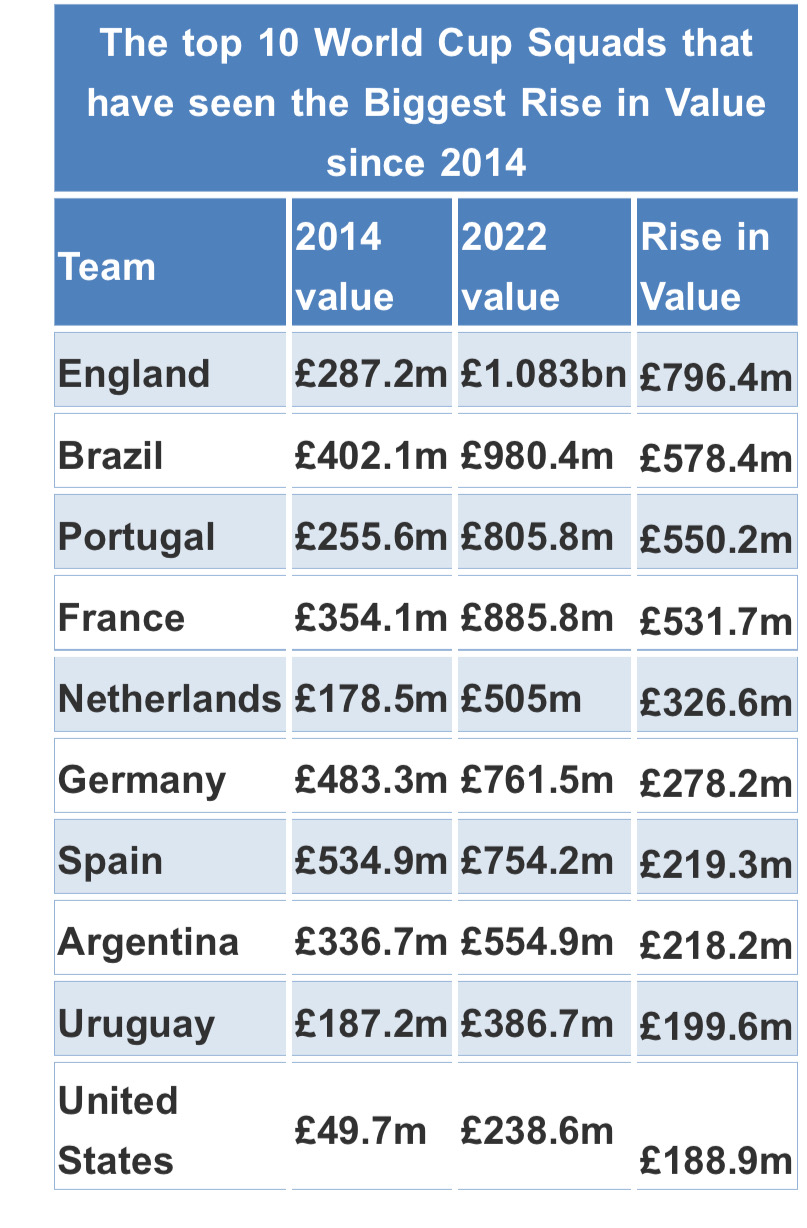 England’s 26-man squad has a total estimated transfer value of over £1.08 billion, an increase of just below £800 million from their value at the 2014 World Cup.

That equates to 277% of their transfer value at the tournament eight years ago in Brazil.

These figures are not only an indicator of the drastically increasing stakes in the world’s richest sport, but of the talent pool England Manager Gareth Southgate was able to pick from.

Transfermarkt.com’s 25 most valuable players across the tournament feature as many as six English stars including Phil Foden and Jude Bellingham.

The Lions featured more than any other team on this list with English players worth nearly £500 million between them. Despite their large price tag, they lost 2-1 to France in the World Cup quarter-finals.

•Morocco became the cheapest side by far to advance to the semi-final.

•Just two of the world’s most expensive squads remained in the competition.

•England left the competition despite their billion-pound price tag.

Brazil team were the second most expensive squad in the World Cup with a total value of £980.4m, up £578m from their 2014 total worth – the second-highest rise of any squad.

The South American football giants boasted five players in the most expensive 25 categories including Real Madrid’s Vinicius Junior who holds the tournament’s second-highest price tag at around £105m.

The famous footballing nation was the betting favourites to win the tournament but despite this, were beaten on penalties by Croatia, a side worth a staggering £650m less than them.

France team, the third most valuable side on the list, have become the priciest team that remained in the World Cup till the final.

The fourth-valued team overall Portugal team, became the victim of a giant killing in the quarter-finals suffering a defeat to Morocco.

The Portuguese price tag of £805m is almost four times that of the Moroccans who are valued at just £207.35m and become far the lowest-valued side to advance to the semi-finals.

The Netherlands come in fifth on the list of inflating squad values with a worth of £505m compared to their 2014 price of £178.5m, they are the only side in the top ten not to have qualified for the intervening World Cup of 2018.

With the previous two World Cup tournaments having been won by sides with the second-highest (Germany – 2014) and the highest (France – 2018) total transfer values, the reigning champions became the betting favourites after they defeated England in the quarters.

The French also boast the tournament’s most expensive player, Kylian Mbappe, valued at around £140 million.

Having finished a meagre third in their group, Germany became the priciest side to drop out of the tournament before the knockout stage with a total transfer value of £761.5m.

Germany’s World Cup started with a one-all draw to Spain followed by a 2-1 loss to Japan who topped group E despite amassing a total squad value of just £132.4m.

The scale of this feat is revealed when comparing the Japanese side’s price to that of the German side, and that of Spain which comes out at just over £754.2m.

A spokesperson for bonusetu commented on these findings: “These price tags are an interesting tool to analyse the game alongside. The sheer numbers are fascinating but it’s also great to see that money isn’t the be-all and end-all, namely with Morocco’s tremendous success against some of the world’s priciest teams”.

While the England squad boasted the largest increase in squad value over the past eight years, throughout the tournament squad prices are up massively compared to those of 2014.

The average increase for the 18 teams competing in the last three tournaments is just over £266 million.

Costa Rica has become the only side possessing a total transfer value less than that they held at the last World Cup with their modest £16 million price tag has fallen from their 2018 total worth of £36 million.

The football power continents of Europe and South America maintain a stronghold on the game in terms of player value with the top 14 valued teams all residing within their borders.

The United States constitutes the most valuable squad outside of this with a total value of £238.5m, Senegal was the highest-valued African side at a similar price, and Japan was the most expensive side from Asia.

Meanwhile, the hosts Qatar claimed the lowest price tag in the tournament at an accumulated worth of just £12.8m.

EDITOR’s NOTE: This research was conducted by Bonusetu.com, a Finnish casino review site providing recommendations, ratings and reviews. It is reviewed and republished by ROUNDCHECK.

The Most Popular 2022 FIFA World Cup Teams On Social Media
INCORRECT: DSTV Did Not Add New Channel 240 For Saudi Arabia’s League Because Of Ronaldo’s  Move To Al-Nassr
(adsbygoogle = window.adsbygoogle || []).push({});